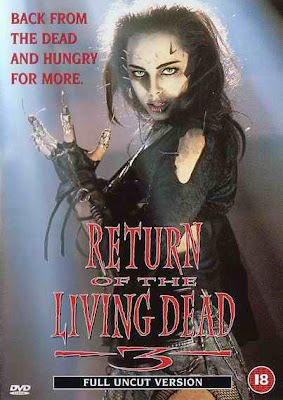 I know the 2nd film was called II, but this one is titled 3, so who am I to argue?  After the series got a little bit too silly, the silliness was reigned in to have a serious zombie love story.

Curt and his wild girlfriend Julie sneak into a Army Research base that Curts Father works at.  There they see an experiment using a canister (one of the fateful canisters also seen in previous films) to reanimate the dead, and then a special bullet to kinda re-kill the zombie.  After this the couple leave, missing the part when the supposedly re-dead zombie comes back to life and brutally kills several of the scientists in a brain crazed slaughter.  Returning home Curt finds out his Dad is being transferred, and so Curt would have to leave as well.  In anger he drives off with Julie on his Motorbike, and then crashes it resulting in Julie being killed.  Curt decides to bring her back like in the experiment he witnessed.  All seems find apart from Julie has an insatiable appetite and keeps biting people, including a member of a violent Latino Gang.  While the government hunt down Curt and his zombie girlfriend, they are also chased by the Latino Gang looking for revenge.

The film is far more serious than the previous two films.  It is also the first time the idea of the Government using zombies as super soldiers is brought up in the series.  A lot of the film revolves around beautiful Julie as she tries to restrain her brain eating urges, mostly by self harm, winding rusty bits of metal into her skin, and slicing metal spikes and nails through her skin to distract from the pain of being dead.  The film is a love story overall, Julie only being able to restrain her urges when she is around Curt, and Curt loving Julie despite her increasing descent into violence, and murder. 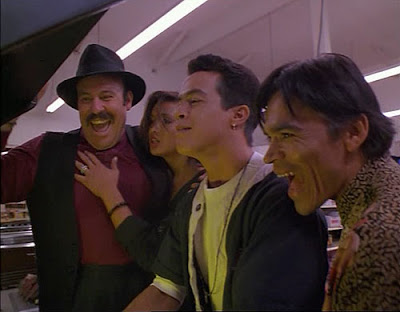 The number of zombies is far less than the previous films.  As well as the zombies Julie creates by biting there are also the inhabitants of the Army bases canisters who escape.  These are all deformed, much more monstrous creatures.  The film is kinda bleak in that no one ends up being happy.

The zombies are ace looking, later on government made zombie cyborgs turn up whose strength makes up for their stupid look.  The Government for the first time in the series are shown as the bad guys.  Sure their zombies, but the Army don't care that they still retain memories of who they once were, and just want to use them like they would machines. Also the zombie test lab thing has the very worst security in the world! Some cool violence, as well as the extreme self harm of Julie, there are also limbs ripped off, a head attached to a spine pulled out of someone, and a zombie with the top of its head missing showing exposed brain.

I really like this film, have seen it quite a few times.  It helps that Julie is hot both as a human, and later as a wild zombie.  The Tramp known as Riverman is another great character and brings some pathos to the film (heh, I don't even know what pathos means!).  Looking forward to seeing Return of the Living Dead 4, and 5!

Posted by Daniel Simmonds at 05:04