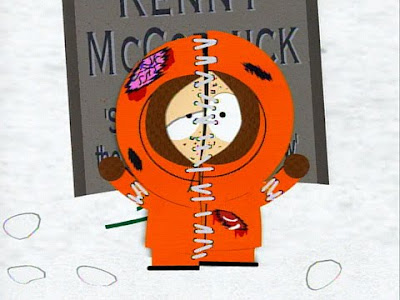 The boys (Stan, Kyle, Cartman, and Kenny) are waiting for the bus to school when the Mir Space station crashes onto Kenny killing him.  He is taken to the mortuary where a bottle of Worcester Sauce accidentally gets knocked into the embalming fluid machine.  This of course turns Kenny into a zombie.  He goes back to school, but no one notices he is a zombie, not even when he keeps randomly biting people.  Soon most the Town of South Park is full of brain hungry zombies, with the inhabitants thinking the zombies are in fact people suffering from a disease called Pinkeye.  Only Chef realises what is going on and heads out with 2 chainsaws to end the problem.  It all ends when Kyle phones the Worcester Sauce helpline and finds out that if the original zombie is killed all the rest will turn back human again.

For season 1 this is a fab episode.  The earlier episodes of South Park are no where near as good as later episodes.  It is quite funny that no one realises Kenny is a zombie, not even when his limbs start falling off, and when he keeps killing people! Another funny part is when Chef is turned into a zombie, he suddenly appears wearing the clothes from Thriller, and starts a song and dance routine.

Not much else to say other than it is a great Halloween episode and has a funny sub plot of a fancy dress contest at the South Park school (Cartman has gone dressed as Hitler, and later his costume is changed to a KKK gown).  Cartman is by far the best character in South Park, he always has the funniest parts, an early example seen here.
Posted by Daniel Simmonds at 12:11