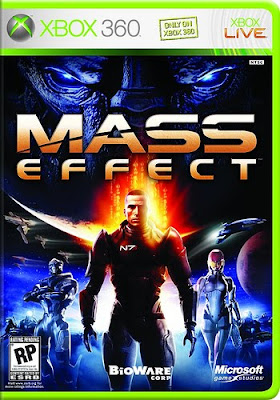 I thought long and hard about writing a review for this game on this ZOMBIE blog.  Mass Effect does have zombies of a kind (called Husks) but overall these show up in only about 5% of the game.  Zombies also show up under the name of something like Thorian Slaves, most prominently during a boss battle with a giant mind controlling plant.

Mass Effect is a Western style RPG.  At the games start you are required to create a character, and give him or her a back story.  My character was a female called Yuna.  She is a red head, has very pale white skin, black lipstick, a scar down one side of her face, and a cool scar over the side of her lips.   My character had had her family and friends murdered by Slavers as a child.  Later she joined the Human Army where her entire squad was wiped out by Thrasher Maws (giant Dune style sand worms), she was seen as a heroine for surviving that.

The basic premise of the game is that a Turian (species of Alien) Spectre (Special Council Agents with limitless powers) has gone rogue.  The Spectre Saren has teamed up with a bunch of robots (called Geth, these robots hate all organic life) on some nefarious errand that sees him causing mischief all round the galaxy.  You get caught up in the plot and due to various events become the first Human Spectre Agent, tasked with capturing Saren.

The game is a mix of role playing game, and 3rd person shooter.  As you progress through the game various people team up with you, including Aliens such as a Krogan, Quarian, Turian, and Asari, as well as fellow Humans.  You can have 2 team mates with you at a time.

The games best element is the dialogue wheel.  When you get in conversations with characters you meet you get options for how to reply to them.  The options you choose result in various differing consequences.  You can be a jack ass, or a good guy, but the options are never too black and white.  For instance, one option sees you talking to a suicidal girl.  Depending on how you talk to her she will either commit suicide, or give herself up to you, there is even the option just to knock her out.  Situations like this prop up in most the missions. 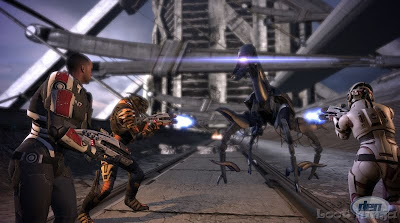 The main plot does not have that many missions, though all are cool, and set in specific planned locations.  There are a lot more optional missions.  These are less interesting in location, but very varied.  There are about 20 different solar systems you can visit.  Usually there is at least one space ship, or planet you can visit.  Going Planet side sees you driving around in a stupid space tank thing.  You have to find your mission objective, as well as have the option to scout for resources that get you bonus XP, and items.

The lore of the game is fantastic, everything is explained, and a big Codex is built up as you progress giving you History lessons on the fictional world you find yourself in.  It makes the game world feel so realistic, like an actual real place.  This is key in drawing you into the fantastic game world.

A giant Space station called the Citadel is the one proper RPG Town in the game.  It is very big, and has lots and lots of fun optional missions in it, as well as the usual shops.

God, I am bad at writing, trust me, this game is fantastic!  Your main course of combat is to use guns such as assault rifles, pistols, shotguns, and sniper rifles.  You can also use Force style powers if you level up that way (you can choose what abilities to level up)  These Force powers give you such abilities such as a Force Push, or to paralyse enemies.  I never used these silly powers, and just become a bad-ass at weapons. 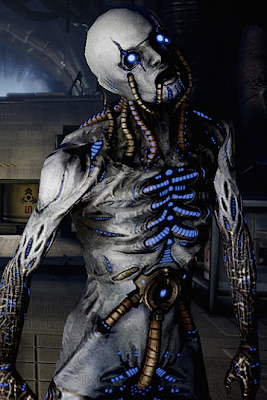 As mentioned enemies include zombie types.  For the most part you will be fighting humanoid looking Aliens of various types, as well as various size robots.  The music is epic in places, and blade runner-ish in other places giving a really grimy Sci-fi feel.  The voice acting is very good, especially the voice of the female main character (I haven't played the game as a male, but heard his voice acting is quite bland and generic).  The game features a very tame sex scene that was demonised by the idiot media at the time of the games release.  The media are total scare mongers when it comes to games.

The game is intended as a trilogy.  Mass Effect 2 is out now (which I am currently playing).  The game lets you import your save file from Mass Effect, meaning not only the character you created, but all the decisions you made whether big or small are also carried over.

Really; an essential game if you own a 360.  Even if you normally hate Role Playing Games and Sci-fi you must give this a chance!  Just don't expect a deluge of zombies, as they really only show up in quite small parts of the game.