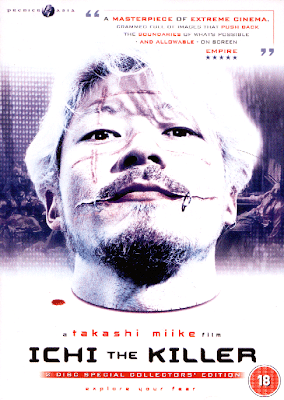 Ichi the Killer is not a zombie film, it's not even a horror film.  Ichi the Killer is a Japanese Gangster Film.  I had wanted to see this for years but had put it off fearing it's reputation as a extreme film full of ultra violence.  The recommendation from a good friend led to me buying it for the princely sum of £3.75.

Kakihara; a member of a Yakuza gang discovers his boss has vanished.  Using extreme measures to hunt down the person he thinks responsible he learns that his boss has been killed by a mysterious Assassin known as Ichi the Killer.  Kakihara becomes the new boss of the gang, and soon discovers that Ichi is not going to stop killing until every single gang member is dead.  Unknown to him Ichi is in fact a deranged simpleton who has homicidal tendencies when upset.  Ichi is being tricked, and coerced into taking out all the gang members on behalf of a small group of people.

Kinda drunk/tipsy so this is even worse written than usual.  I use Justin McElroys recommendation for improving writing by quantity rather than quality.  The film is in Japanese, so subtitles.  The structure of the film is mixed up quite a bit.  Scenes play out of sequence with no warning, so earlier scenes suddenly make sense when seeing scenes from later in the film.

The film really is not as extreme as it had been made out.  Sure there is a lot of violence; a heck of a lot, but the violence is infused with black humour so there is never any bleakness to all the torture, and blood.  Many of the effects are obviously CGI, while ok, it is noticeable and does take away somewhat.  The most sickening thing I found with this film was sorta frequent close up shots of semen, nice. 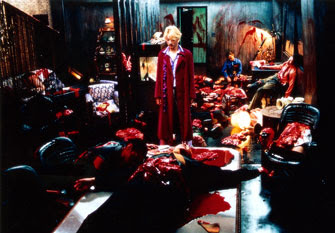 The two main characters of Ichi, and Kakihara are what make this film so amazing.  Ichi is obviously insane.  He gets no pleasure out of murdering, and always appears to kill by accident.  He wears a black rubber suit with a number 1 on the back.  He has a blade on the back of one of his boots which he uses to slice open peoples throats via a roundhouse kick.  He has the craziest smile, like he learnt how to smile via a text book.  He comes across as a total pawn, too damaged to operate in society normally.  He is the ultimate Sadist, getting off on seeing violence.  Tadanobu Asano is utterly fantastic as the masochist Kakihara.  He steals every scene he is in.  His character has massive scars either side of his mouth, with piercings used to hold the scars shut.  He absolutely loves pain, and gets off on it, in one scene all too readily cutting his tongue out for no real reason.  He is savouring the meeting between him and Ichi, and it is what the film builds up to and climaxes with.

The film is really good, very original, and has a fantastic style to it.  I really have not seen anything like it really.  Definitely worth watching!  Don't believe the rumours, the film is not nearly as graphic as people say, but still a great great film.