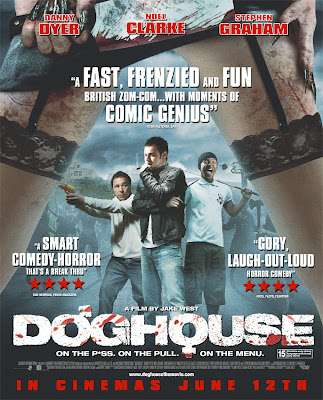 Doghouse is a British horror comedy set in a remote English Village.  It is very much a lads film with lots and lots of misogynistic views, and laddish behaviour going on.

A group of lads in their late 30's head off for a  boozy weekend trip to the remote Village of Moodley. They are going for the benefit of Vince, one of their friends who is in a bad way due to a recent divorce.  They arrive to find the Village is a complete dump, and seemingly deserted.  Quite soon they are under attack by homicidal man hating flesh eating feminist cannibals.  The whole female population of Moodley have turned psychotic.  In a Village where the females outnumber males 4:1 this is a very bad place for the sexist lads to be. 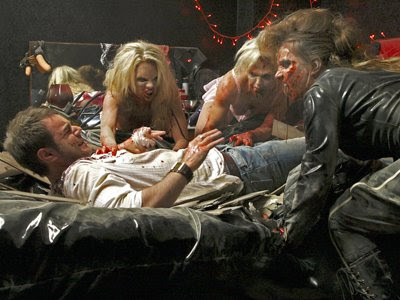 This film is funny, it reminded me quite a bit of Shaun of the Dead, though not as good, several bits were even laugh out loud funny.  The film really doesn't take itself seriously. The weapons the lads use to battle the zombies (or zombirds as they are called) are hilarious.  'Weapons' used include a remote controlled car, a Frisbee, a bucket of tar, a super soaker, a football, and a plastic toy sword.  There's a funny line in the film something like "right, we need to find a weapon that doesn't have made in Taiwan printed on it".

The dialogue is what makes the film as funny as it is, being frequently hilarious, the plot may be a bit vacant, but the script makes up for it, weather it be the survivors discussing if they would still 'do' the females despite them being zombies, or the debacle over the house there supposed to be staying at there is lots here to give real character to these male stereotypes. 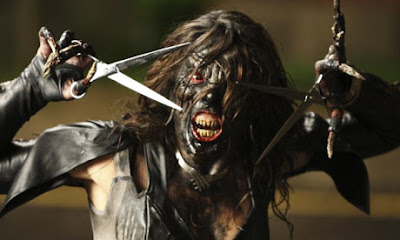 The zombies are flesh eaters, but all use weapons rather than their hands to attack the men.  The Wicca shop owner is armed with a fake sword, the hairdresser has two pairs of lethal looking scissors, while the lollipop lady is armed with her stop sign.  The zombies are of the slow shambling kind to begin with, but later evolve into more aggressive, faster, and stronger zombies.  They all look great, being really done up, and there are many many different types of look, it seems when the virus struck the females were all out at their respective jobs.  The zombies also have some type of thought as well.  The fat zombie has a birthday cake with human fingers instead of candles, the butcher has strung up various body parts on meat hooks, a neat touch.  The zombies appear to be easier to kill, rather than destroying the brain, any type of body trauma can stop them. 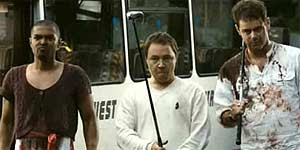 A funny film, hilarious in places.  A quite surreal ending, but it fitted the films tone well.  Well worth seeing if your after some British zombie comedy!

Posted by Daniel Simmonds at 06:13