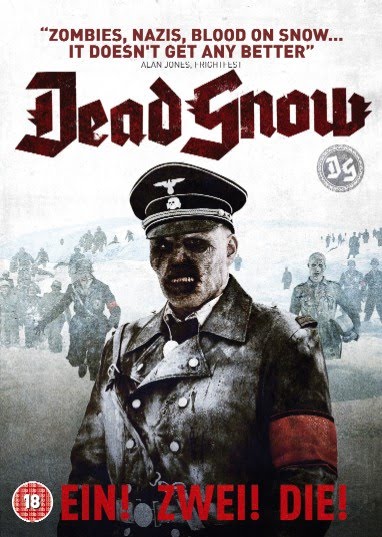 Dead Snow Dead Snow, Deeeead Snoooow! Ahem.  I think that the biggest reason that Fargo is as good as it is, is because of the setting.  Having the film take place in the snow gave the film a really distinct look.  I highly doubt the film would had the same impact if it had been set in say a desert.  Dead Snow as the title kinda hints at is set in a snowy location.

A group of medical students set off through the snowy wastes of Norway (I think) to their friends log cabin, for a wild holiday of drinking, twister, and snow ball fights.  They have not been at the cabin long when a old man shows up at the door.  He gives them a brief history lesson about a group of Nazis who had fled into the nearby hills at the end of World War II after terrorising a Village for several years.  The man unimpressed with the 'city kids' leaves.  Their friend Sara who owns the cabin has not turned up (she was going to ski there) so her boyfriend sets off on his snow mobile to search for her.  Soon after the group discover a box full of gold hidden under the cabin.  Pretty soon they come under attack by a group of zombie Nazis led by their zombie leader Herzog.  Can the kids survive the misery of the zombie Nazis? Woooo! 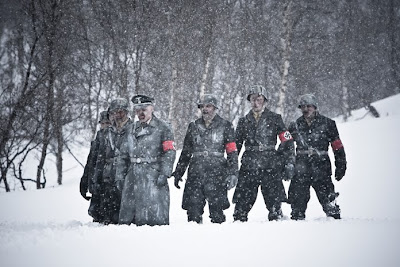 I loved this film.  I seem to love most zombie films (with the exception of the utterly terrible Zombie Chronicles), so I don't know that I'm that good of a reviewer being so totally biased.  There has been quite a mixed reaction to Dead Snow with people either thinking it is average, or fantastic.  The film is Norwegian, and so has subtitles, but these are well written, and don't get in the way of the action.  The characters are a likable bunch, but it's still cool when the blood starts to fly!

The zombies can run (well a shambling type run), and roar like monsters.  They follow the lead of the commanding Nazi zombie.  He looks fantastic, and acts like you would expect a leader to, staying out the way of the action, and observing things through a pair of binoculars.  All the zombies have a kind of intelligence to them; they usually use knives to kill their victims, and they work together. 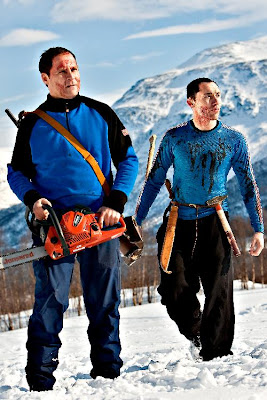 There is lots of action here.  The humans put their all into fighting the zombie Nazis using a variety of weapons.  Their are decapitations, severed limbs, and even a few guts spilling out.  Quite bloody in places which contrasts well with the pureness of the deep snow so that everything looks hyper real.  The film has quite a streak of dark humour running through it as well which was appreciated, as well as more than a few purposeful nods to the Evil Dead films.

I really enjoyed this film.  It was unique as a zombie film due to it's setting, and is definitely the best zombie Nazi film I have seen (not hard it's a niche genre!)

Posted by Daniel Simmonds at 00:50