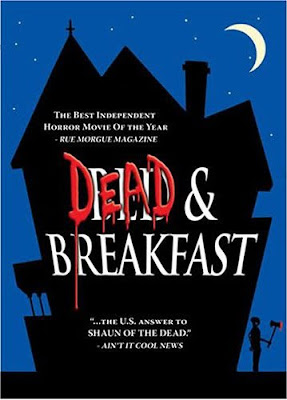 Dead & Breakfast has a quote on the cover saying something like "Americas answer to Shaun of the Dead".  Sadly not.  The film attempts to combine horror and comedy, but falls flat on its face many many times.

A bunch of 20 something kids get lost on the way to a friends wedding.  They decide to stay at a guest house in the small town of Lovelock run by a creepy man (David Carradine).  During the night they find the chef brutally murdered, and the owner dead from a heart attack.  As suspects the local Sheriff says they cannot leave the town.  Soon after an evil spirit is accidentally released from a weird box.  The evil spirit starts possessing everyone in town.  The survivors have to find a way to stop the evil spirit before it's too late.

My main problem with the film is it thinks it's so damn funny, and doesn't ever let up in showing you it is with ill fitting comedy moments.  Sure some of the humour in the film is good (such as the bizarre Thriller style dance the zombies start doing randomly) but mostly it falls flat.  This is no where more apparent than the main zombie (the one who was first possessed) who carries a severed head around with him, and keeps doing ventriloquism with it to rubbish effect.  Throughout the film there is a singing narrator.  He is ok, but becomes almost awkward to watch as he obviously thinks he's far cooler than he actually is. 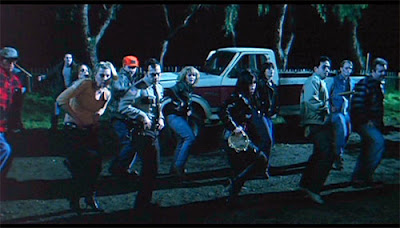 The zombies look the part, but are really useless.  They just seem so neutered, and inept.  Maybe this was meant to be the case?  One key scene which has the zombies assaulting a house is made farcical by only one zombie attempting to break in at a time, the others stand away from the house doing nothing.  The main zombie battle is appalling, the main antagonist literally just stands there jabbering away before being extremely easily killed.  What's the point of looking the part if your not going to act the part? The zombies just bring no threat with them.

There is some violence, but not too much.  Some inspired death scenes early on, such as death by cymbal, and death by drumstick.  Most the guns are specially made by one of the characters.  The guns being big hollow lead pipes that a shotgun shell is hammered out of.  The abundance of these is a bit silly.

The film can be quite funny in places, and has ace intro credits.  David Carridines role is short, but a highlight.  The singing narrator is a cool idea even if it isn't always that greatly done.  Not a great zombie film, but different enough I guess.

Posted by Daniel Simmonds at 16:46

i wish movies could figure out what they are doing before they do it... some gives them money and... someone decides what we see, i just want a movie that entertains... not insults...

thank you for all your reviews and thoughts...