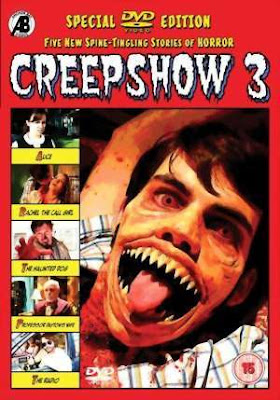 You know what? This film is terrible!  I knew that was the case before buying it, the excellent Darkside magazine said so (R.I.P).  Not quite sure how I ended up buying it to tell the truth, only noticed I had done so when I got a confirmation email from Amazon.  The film like those before it is a portmanteau; a collection of five mini stories.

I'm going to launch some spoilers, the film is bad enough that I don't think anyone would seriously be offended by this.  The first tale Alice is about an allegedly teenage girl (I say allegedly as the actress looks to be in her thirties) whose father buys a universal remote control.  Each time he presses a button on the control Alice is warped to another reality.  In one her family are all coloured, in another her family are Spanish. Each time she warps her body becomes more and more deformed, which she doesn't seem to mind.  Eventually she turns into a white rabbit,  I don't know why.

The second tale is called The Radio.  Jerry; a loner security guard discovers his new radio has the ability to talk.  Pretty soon the radio has Jerry doing everything from theft to murder.  But is Jerry the only person who has a talking radio?

The third story is called Call Girl.  In this one a serial killer prostitute visits a client to kill him, only to end up his victim as he is a badly CGI'd vampire.

The fourth story is also the best, maybe because it's the shortest.  Two ex-students of a trick playing Professor visit him to meet his fiancee.  They become convinced his wife to be is actually a robot, and that the Professor is playing a trick on them.  To teach him a lesson they decide to 'dismantle' the robot with zany results.

The last story really drags.  A rude Doctor accidentally poisons a homeless guy with a bad hotdog.  He starts to see the ghost of the homeless guy everywhere he goes, or is it just his billion self prescribed pills that is causing hallucinations? 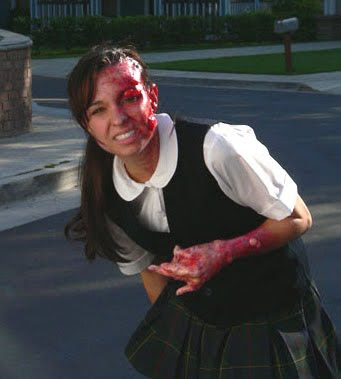 The film is dreadful.  It is unrelated to the previous Creepshows, apparently the director got the rights to use the name, and decided to add 'three' to the title as a means to sell more copies.  The problem with this film is that it is all so cheap and tacky.  The actors are terrible for the most part.  The special effects are bad CGI, truly awful.  The plot for the stories are boring, nothing goes anywhere, the story starts and ends with no arc, nothing happens to warrant the length of some of these stinkers.  The stories are all connected in that characters intermingle, I guess that's ok done, but gah.

The film stinks, avoid like the plague, unless you see it real cheap.  Don't expect to be scared, but do expect to laugh out loud at how bad it is (something I frequently did while watching).