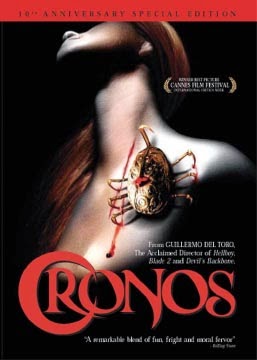 Chronos was released in the early 90's, it's by Guillermo Del Toro (whose later works include Hellboy, Pan's Labyrinth and The Devil's Backbone)  The film is a vampire tale, but quite different to the traditional vampire story.

An old antiques dealer called Jesus discovers a golden beetle shaped amulet in a statue he has in his store.  While fiddling with it a mechanism inside the amulet activates which results in metal legs clamping onto the antique dealers hand, and a golden stinger piercing his skin. An elderly dying man, and his meat head thuggish son (Ron Perlman) have been looking for the amulet for many years, as the old man believes it grants immortality.  Discovering the location of it the man gets his thug to start a process of harassment against Jesus which results in Jesus's apparent murder.  Jesus had been reluctant to give up the amulet as it has been making him feel, and look younger the more he uses it.  But the power of the amulet comes at a cost; the user of the amulet craves blood, and needs blood to stop themselves rotting away. 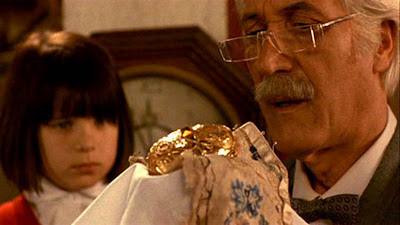 The film looks dated now, almost 80-ish in it's look, but had interesting aspects to it.  The film was made in Mexico, and is all in Spanish with English subtitles.  The acting is quite good, Ron Perlman in particular is really good.  He is a bumbling almost comedic character, forever cursing his Dad who keeps sending him on what he believes to be fools errands, but scared of him.  Despite this his character is quite violent and brutal, having no qualms over killing or causing pain and misery which makes him a bit more chilly than straight out funny.  The character of Jesus is ok, kinda puts across the addiction the amulet gives.

The vampire aspect is there in that the amulet bearer burns up in sunlight, and craves human blood, but the bearer resembles a zombie more than a vampire.  Not drinking human blood results in Jesus becoming nothing more than a walking corpse with stiff jerky movements.  One scene in which he attempts to write a letter to his wife sees him trying hundreds of times as his stiff hands just are not up to the job of writing. 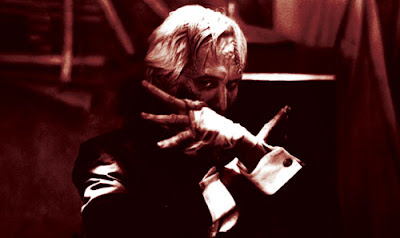 There is a feeling of pity to Jesus's character, he never wanted any of what happened to him, it was all an accident.  Constantly with him is his young niece, a small girl who is his only solace.  She looks after him, and follows him around not disgusted by the monster he has become.  Most the film she is totally silent, but seems full of love towards her Grandad.

I don't think I would ever watch this film again.  I'm glad I did see it, but it is a product of it's time and feels a bit stodgy, and dark (as in a lot of film is set in dark places, not the theme).  A good film, just not a great film.  It is interesting to see where Del Toro came from though.

Posted by Daniel Simmonds at 02:53