The Castlevania series is one of my all time faves, consistently good games with only a few misses.  When I heard that the Gameboy Castlevania: The Adventure was being remade for WiiWare I was excited.  The game has turned out a lot better than I hoped, keeping the graphics good, rather than changing them all for polygons (which I had feared).  Note the game is not actually a remake, but instead a reimagining.

Being a Castlevania game usually means no real story to speak of.  That is the case here, but this is not a bad thing for the series, I wouldn't have it any other way!  Basically Castlevania the home of Count Dracula has reappeared.  As a descendant of Simon Belmont you have the power to use the mighty Vampire Killer (a magical whip), so you head off to infiltrate the castle and defeat Dracula yet again. 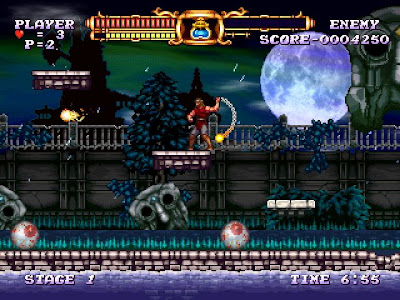 The game is a level based 2D platformer, and is very similar in look to previous Castlevania games, again not a bad thing.  There are six levels in all, all taking place in a different section of Castlevania.  Each level is split up into about ten different shorter sections, and feature alternate routes, as well as a mid-boss, and end of level boss. Well in truth there are five levels, the sixth being just a boss fight with Count Dracula.

The music for the game is fantastic, most the tunes have shown up in previous Castlevanias but are remixed here. Castlevania has always had the best videogame music. The levels are from locations which have all featured in other Castlevanias.  You get the clock tower level, the entrance halls level etc, but all look cool. The graphics are of a higher quality than Snes and look very crisp and solid even on my 42 Inch screen. 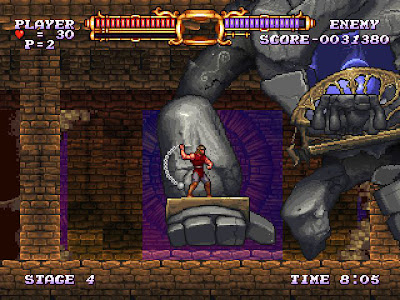 Enemies are the usual suspects. Yet again I say this is not a bad thing! The enemies have all been remade, so look slightly different to how they usually do. Floating Medusa heads, mudmen, armour, skeletons, bats, Mermen etc. Fantastic! No zombies though, oh well. One thing I did notice is that this game loves eyeballs. Most levels feature large rolling eyeballs, one of Dracula's special moves is to drop loads of rolling small eyeballs at you, and the end of level boss for Level 1 is in fact a gigantic eyeball! Talking of bosses; the bosses in this game are all real cool. Having two per level means more variety, and some normal enemies from previous Castlevanias have been upgraded to boss status!  Favourites such as the giant bat, stone golom, and of course Death appear with other promoted bosses, such as a Succubus, and an enchanted sword. One cool boss I had not seen before was a Jekyll and Hyde man who could alternate between a slim fast man, and a hulking rock throwing brute. 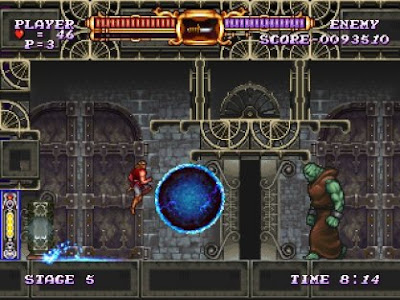 The whip you use can be upgraded by collecting orbs hidden in the levels, the final form giving you limited power to shoot fireballs from the whip. The usual secondary weapons are all here as well, you know; axes, knifes, crucifixes, and the ever useless stop watch (that lets you pause the enemies for a few seconds).

I can't be unbiased, I admit I love all the Castlevanias. This is no different. It costs 1000 Wii Points, and it took me two and a half hours to complete in one sitting (there is no way to save the game), but includes alternate routes through levels, as well as unlocking random things upon completion.