We all Scream for Ice Cream - Masters of Horror Episode Review 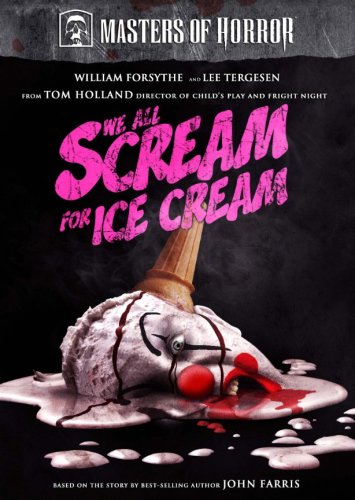 We all Scream for Ice Cream is the first episode on the 2nd Season 2 boxset of Masters of Horror. It is directed by Tom Holland (who directed films including Fright Night, and Child's Play)

As children a gang played a cruel prank on local retard Buster (the local friendly ice cream truck driving clown) which accidently resulted in his death. Now grown up and with families it seems thier guilty secret has come back to haunt them, as one by one the grown up members of the childhood gang meet a (literally) sticky end as they are turned into melted ice cream caused by voodoo ice cream eaten by thier possessed children by the angry spirit of the not so friendly clown Buster(!) One of the gang, a man wracked with guilt all his life of what he did that fateful day sets out to discover just who is actually responible for the murders, and how to stop him.

The episode is ok, it is certainly not a bad episode, and is not boring, it is just a bit loose at the edges. There are quite a few key plot points that are never explained, and some plot holes, as well as some plain ridiculous moments. The character of Buster is someone you can feel pity for, but in the present his spirit is kinda bland. Mostly he just dishes out ice creams to children from his ghost ice cream van, only at the end does he actually leave it, and then for a slow bizarre fight that keeps leaving him momenterily frozen. He certainly looks the part; like a bad bad clown, but this isn't reflected in his actions.

The acting is of a good quality by the adult actors, and the flash back children, but the present day children are all emotionless drones which leads to thier possession having them not act much different to when they are normal. Death by ice cream is a hard thing to make look good, mostly it works though, especially the melting man in the hot tub, but sometimes the deaths are too computer enhanced and just look really fake, like bad 90's CGI.

The Director states the image of a clown delivering ice cream is a universal one, and so easy to relate to. Prehaps in America, but here in the UK ice cream vans are run by very obese bitter men, or so my experiance tells me, so just seemed plain bizarre. It is a original idea; death by ice cream, it's just a bit too silly to take seriously. Still not a bad episode, and has an actor from the ace Devils Rejects in it.