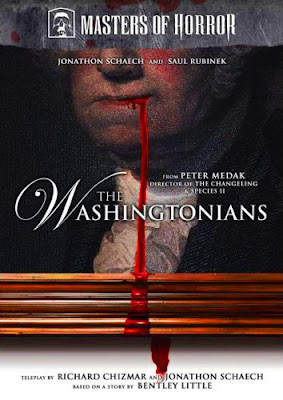 After the cruddy Sounds Like episode my faith had been shaken a bit with the Masters of Horror.  Thankfully it is now restored with the light hearted and fun The Washingtonians.  With a subject matter as ridiculous as this it is good that a serious tone wasn't attempted, instead Director Peter Medak goes for a humorous vision with characters hamming up their parts, and quite a few laughs.

A man inherits his late Grandmothers house, while looking through the basement he comes across a document that has the power to alter American society, and shake deep held beliefs to their core.  He finds evidence that George Washington was actually a child eating cannibal!  It seems a group of homicidal flesh eating period dramatists called the Washingtonians will do anything to keep this grisly secret a secret.  The man, his wife, and young child soon find themselves under persecution by powdered, wigged, horse riding historians who have infiltrated every facet of society, from Cooks to Police.  Will they survive, or will they meet their makers? 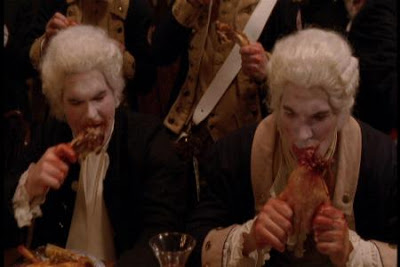 This is a really fun episode, and is very silly, but knows so.  The cannibals wear period costumes and nasty false teeth, and are armed with axes and muskets, they are not something you can be scared of, and come across as really stupid, and are mostly really old, but still they are shown as a tangible threat.

Being cannibals there is lots of body parts through the episode, severed fingers, beating heart, and a gruesome banquet all feature, as does a flashback of Thomas Jefferson being ripped apart by old times ghouls.  Also featured in flashbacks is the man himself George Washington, and featured in paintings showing what he was really like.

The plot is really silly, but doesn't ever get too padded rushing along at a fast pace.  The film takes a swipe at American politics which isn't too covered (leading to a really weird but funny ending), Peter Medak says that this swipe at politics was one of his aims in making the episode.

It really seems the cast and crew had a lot of fun making this episode, this is reflected in all that happens.  A worthy addition to the Masters of Horror, though not in the least bit scary.