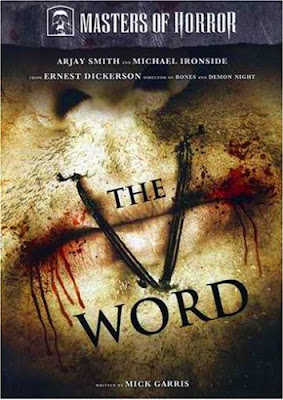 Here it is, the last episode of Season 2 of Masters of Horror.  I don't recognise the director for this episode, the actual story was written by Mick Garris who came up with the idea for Masters of Horror in the first place.  The V Word is a classic Vampire tale, very bloody.

Two videogame geeks decide to go to a mortuary to see a dead body of a jock from their year at school who had died recently.  Though one of the geeks cousin is supposed to be working the night shift there, the place is deserted.  It's dark and creepy there, and Gothic organ music is coming from upstairs.  Kinda freaked out the geeks go to leave, only to find the door to the mortuary locked.  Scooby-Doo like they explore the creepy house looking for a alternate exit, stumbling around and walking into dead bodies.  Finally they discover a fire exit, but also a whole host of dead bodies on gurneys, including the cousin of one of the geeks.  The cousin has recently had his throat ripped open.  After discovering this one of the corpses comes to life, a Nosferatu type Vampire.  One of the geeks is caught and seemingly killed, while another one escapes.  Unfortunately the Vampire follows him home... 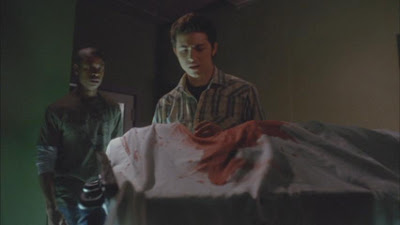 The episode is set in modern day, and starts with a montage of one of the geeks playing Doom 3 on the X-Box 360 (it is compatible, but odd they would use a last gen game on the 360).  The videogame nerd stereotype is quite apparent, but not to the point where it is insulting.  Nearly though.  The characters comment how much the mortuary is like a level from one of their videogames, and how there so used to seeing dead bodies in games it's about time they saw a real life one.  At the episodes end a character says 'it's Game Over' which made me wince.

The episode is very bloody with lots of throats being tore open, and sliced, lots and lots of blood and gore.  Michael Ironside is ace as the master vampire, really veiny and crazy looking, the geeks as vampires look quite terrible though, especially one of them who really overacts with his 'cool vamp' thing he has going on.

It is a very basic story, and it does drag to begin with, but later the episode does improve somewhat, it's dumb, and fun, a good end to the series.

Overall Masters of Horror series 2 just hasn't been as good as Season 1.  Season 1 had far more nudity and gore while the episodes in Season 2 where much more of a mixed bag.  Still I hope a third season is created.  As long as they keep making them I will keep watching them.