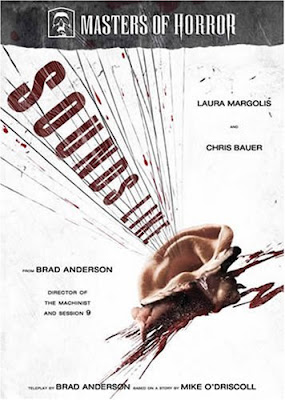 Sounds Like is another Season 2 Masters of Horror episode. It is directed by Brad Anderson whose past films include the interesting 'The Machinist'. The set up for the episode sounded like it was going to be a cool episode, but it really wasn't.

Chris Bauer stars as a middle age call monitor at a software helpline call centre. He has a very special gift in that his hearing is incredible, everything to him is super loud and clear. By concentrating he is able to drain out all sound apart from that which he wishes to hear. His beloved child died of a incurable disease in the recent past (well a year or so back), he seems to have coped with his grief by throwing himself into his work, while his chatterbox wife wants another child. His hearing begins to get out of control, unable to control it everything is agony to his ears, from light bulbs to insects, absolutely everything is making horrendous noise driving him slowly insane. As his grief over his dead son intensifies, and his life starts to fall apart the noise of the world increases and increases leading to pure madness.

The story for this episode sounded great. I once read a short teen horror story about a girl who could hear everyones thoughts which drove her insane, also there was an episode of Buffy the Vampire Slayer in which she gets the gift to hear everyones thoughts, also leading to bad consequences. Due to these I kinda thought I knew what to expect.

This episode is bad. To show the noises the man is hearing extreme close ups of the object in question are shown. These are used far to frequently leading to frankly boredom as it seems most the episode is these extreme close ups with annoyingly loud sounds. There is some violence in the episode, but all occurs off screen, so nothing really happens on screen of any note.

I hate people who just throw loads of insects at the viewers and thinks that is horror. No, that is not horror, that is just disgusting. There are hundreds of maggots, worms, and flies in this episode, they repulsed me, and made me feel sick, they did not scare me. The call centre monitor started the episode as a jerk, and never advanced at all. The story just seemed to drag on far too much with no need to, I could have easily edited the episode down to a brief 30 minutes.

As stated the extreme close ups got old fast, but one sequence in which Bauer has a chest mounted camera attached to him really shows the characters insanity, I love that type of camera shot, of an odd close up of someones face as they spastically jerk around spinning the view.

I didn't enjoy this episode. Also the director Brad Anderson come across as a dick.