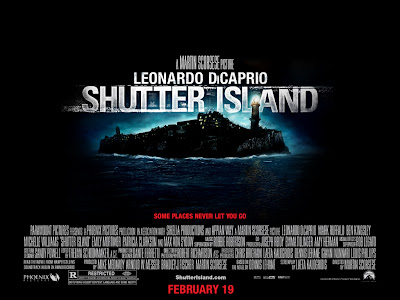 Shutter Island is a adaptation of an early 2000's Thriller novel. The film is directed by Martin Scorcese, and stars Leonardo De Caprio.

The film is set in the early 1950's. De Caprio is a US Marshall called Teddy. He travels to an Island (Shutter Island) which is home to an Asylum for the Criminally Insane with a new Partner after the Asylum authorities report a break out from a female inmate housed there. The Asylum is very well guarded with high walls and electric fences, and seems also that the escapee managed to do so out of a room which was locked on the outside. Teddy's investigation is hampered by the Asylum staff who are evasive, and seem to be doing their utmost to impede his investigation. As he investigates it seems more and more like something sinister is occurring, and that he cannot trust anyone, as Staff and Patients both appear to be hiding information, and know things that they wont share. It may be that Teddy was lured to the Island purposely, and that he may be stuck in a trap caused by his own curiosity.

The film has a very paranoid feel to it, but creeps up, and builds throughout the film. The viewer discovers information the same time as Teddy, and so share the growing sense of dread and malice. The films tone reminded me heavily of several different films. The Wicker Man in the way Teddy seems to be on a fools errand that only he is not privy to. Also reminded me heavily of Identity, and the TV series The Prisoner.
The film is a Thriller first and foremost, but does also go into near supernatural territory as Teddy dreams about his dead wife a lot, as well as frequently hallucinates that she’s there in real life, as well as has visions of dead children (from flashbacks it is shown he was a soldier in WW2 who liberated Dachu and was severely affected by the amount of murdered there). A key element of the film is the weather, a typhoon rages around the island which seems almost paranormal in its ferocity, Characters liken the storm to God's rage.

There are plot twists and turns at every point of this, certainly a film where if you re-watched it, many scenes would have dramatically different connotations. The film mostly succeeds in creating such a sense of foreboding and dread. You really want Ted to discover the Islands secrets, but at the same time I found myself silently willing him just to flee the Island and run as far away as possible (possibly while screaming)
The film looks great, the 1950's setting is fantastically realised, and the characters are all really well done and convincing (everyone from Ben Kingsley as the head Dr, to Ted's deceased attractive wife). The twists are mostly really well done, and hit more than miss. I really don't know if it is a film I would want to see again knowing the plot as I do now.