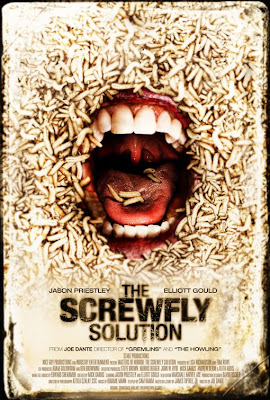 The Screwfly Solution is directed by Joe Dante (who directed the Howling, and Gremlins). It stars Jason Priestly and is a bleak tale concerning Armageddon of the human species.

It starts off as isolated incidents around the world, men suddenly and brutally killing females for no apparent reason. This increases until it becomes a pandemic; entire towns being sealed off by the military as the male population turn on the females. Two insect population control scientists realise that someone has released an airborne virus that is sweeping the globe, it only affects human males. When human male gets to a state of arousal a psychotic anger sweeps over them, it seems someone is trying to cause the extinction of the entire world. As the virus spreads further and further and females become near extinct the 2 Scientists must protect one of the scientists wife and daughter, who may well be the last females alive in the world. 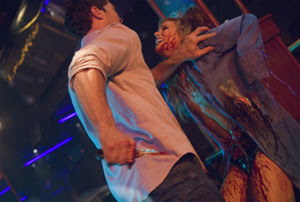 After that on to my review. For a hour long episode, and a limited budget the premise is very ambitious. The episode takes place all over the USA to show the spread. Seeing as it was all filmed in the one location this illusion is impressive. There are a lot of actors in this episode (a total of 55 different speaking parts). The story is bleak, and the eventual cause of the virus was expected, but well implemented.
Sexism is a big theme of the episode. Alan and Barney (the two scientists) discuss this in an early scene with an uber feminist. The first females killed are those working in the adult entertainment industry, it discusses Sharia law, and the fact that who ever has unleashed this virus it wouldn't have been militants from the middle east (for a change). Child molestation and incest is also briefly looked at during the episode, so bleak subjects.

There is not that much violence in the episode, most of it is spoken about, and occurs off screen. One scene in a strip club sees a stripper brutally bottled, but nothing graphic is shown. A few CGI deaths later on in the episode look pretty lame.

The episode is well made, but the plot falls apart a bit. A key scene seems to just be missing, a woman heads off to a location, next we see her she is in Hospital injured with no explanation how she got her injuries. The last quarter of the episode drags a little as nothing really happens, and it seems they didn't know how to finish the story as it literally just ends without a real end, it just fades to static and the credits roll.

A woman pretends to be a man to avoid being killed in several scenes of this episode, she looks ridiculous, and her 'man' voice she puts on is hilarious. Still this is less preachy than Dante's last episode (the one criticising the American Government and with the Zombie Soldiers). A bleak episode, but unique, and borders more on sci-fi than horror.