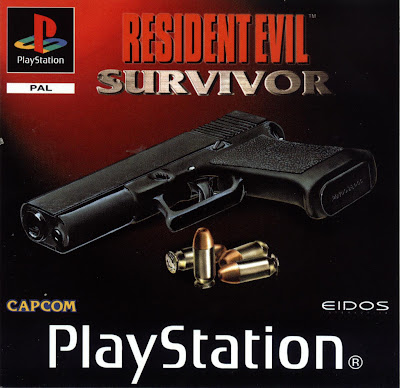 First off, I am writing this from memory as it has been many many years since I played this game as I unwisely sold it. I am constantly looking for it cheap on E-bay, but alas. I do realise when ever I have nothing to write about I seem to always fall back on Resident Evil games, but they are the best zombie videogame series around! (UPDATE: I once again own this game)


Resident Evil: Gun Survivor is a light gun game, and a first person shooter. It was intended for use with the G-Con 45, due to not having a D-pad (unlike the G-Con 45 2) movement was near impossible, so I only ever used a control pad to play it, which makes it into more of a First Person Shooter. 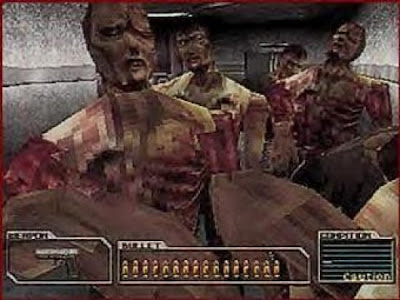 The game starts with you having a fight with a man on a helicopter. It crashes and the man you were fighting lies dead, while you suffer amnesia. The rest of the game sees you avoiding the zombies and monsters of Sheena Island (where the games set) while finding out exactly who you are, and the cause of the monsters on the island. The story is really good, and is the best thing about the game. It rapidly becomes apparent that you yourself may be the cause of the outbreak, and that you may not have been such a good person pre-amnesia. There are several characters who appear throughout the game. These include the SWAT team leader of a group of SWAT Monkeys (!) and 2 young frightened children as well as a few others.

The game is quite short, just over an hour long. Unfortunately there are no save points in the entire game, so it is quite an undertaking to play the game! There are many alternate routes through the game which take you to a wide variety of locations which even feature different enemies and bosses depending on the path you take. Locations include a Prison, a Nightclub, Office blocks, sewers, and a Mr X production factory (full of literally hundreds of Mr X's!). There are 3 major alternate routes through the game which vastly effect your characters antagonist through the game (you never see the antagonist during most the game, so 1 of 3 possible characters will reveal themselves at the games end). 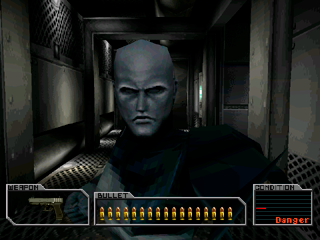 As stated before story is key to this, and the game despite being a spin off from the main series is actually canon (for instance there is a post Resident Evil 3 report from Nikoli). That is about the only reason to play the game. The graphics being a Playstation one first person perspective game looks terrible, dreadful, and very very dated now. The controls are odd as they are quite tank like being designed with the G-Con in mind.


I really can't recommend this to non-fans of Resident Evil, it will offer nothing apart from a cool story, for fans of the lore though it is essential and features all the enemies expected (Tyrants, Zombies, dogs, crows, crocodiles etc).