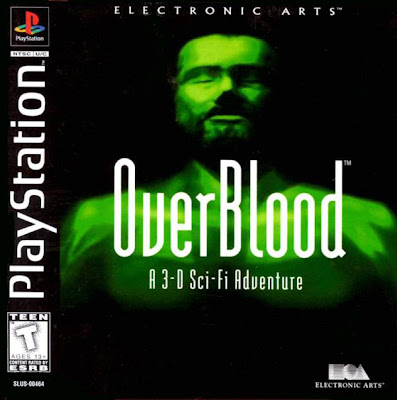 Overblood is a janky sci-fi tinged survival horror game released on the Playstation many years ago. I have a love/hate relationship with this seemingly as on 3 occasions I have brought it, only to sell it at a later date. Being a game concerning amnesia it is fitting that I have not played this in over 10 years, so my memory might be a little hazy and rose tinted.

A man wakes up from a deep freeze, he is in a mysterious room with no memory of who he is, or where he is. Exploring the strange labs and rooms of the compound he meets a lady. She too has no memory. Along with a small robot they must work together to find the answers to who they are, and where they are, as well as escape the gigantic place.

The games plot is the best thing about it. The clinical setting, and the signs of devastation that have laid waste to vast sections of it, as well as the lack of any other people leads to many questions which play out well through interesting cut scenes. It may seem an odd reference, but it has a lot in common to Ico, or Shadow of the Colossus in it's stark loneliness. The location is like the Marie Celeste, bizarrely absent of people where there should be them. As a result you get to like the 3 main characters, and care about them.

The game is very puzzle based, rather than combat based. This is certainly a good thing as the combat is hideously implemented, very awkward and cumbersome. Thankfully there are literally about 3 enemies in the entire game. All 3 are zombies, and act the same way leaping around. There are many time based, and instant death puzzles, which can lead to some unfair automatic deaths. The game from the very start features these; the start room is freezing cold, you have to find clothes for your character, and escape the room before you freeze to death.

The game is not that long, around 3 or 4 hours I would guess, perhaps shorter, and it looks awful, with ugly polygons used for the character models. The story is great though, and a atmospheric experience, always leading you on to discover the next plot point. I want to buy this, if I see it cheap on E-bay I shall.