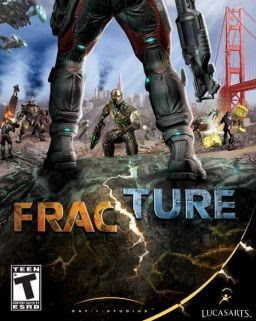 Fracture is a third person shooter which uses a unique feature of being able to rise and lower terrain.  It received average scores on release, being described as mediocre, and lost in a sea of much better shooters.

I'm not quite sure exactly what the story of Fracture is, the game jumps right in and assumes you already know what is going on.  It seems that America has been split into two different groups with different ideologies for the advancement of humans.  One group sees technology as the way forward, there soldiers armed with the best weapons, and armour protected by force fields, they are the ones who got the technology to raise and lower ground, which it seems they used to great effect to stop the country flooding or something.  The 2nd group are based in west America, with their HQ in San Francisco, these are the Pacificans.  They are led by a rebel General Sheridan.  The Pacificans see genetic alteration as the step forward, and are seen by some as less than human after altering their DNA so much.  They have minor powers of telepathy, and are altered to suit their needs, for instance the ability to jump massive distances, and move faster than the eye can see.  Anyway the Pacificans have declared war on the non-Pacificans after DNA altering was declared illegal or something. 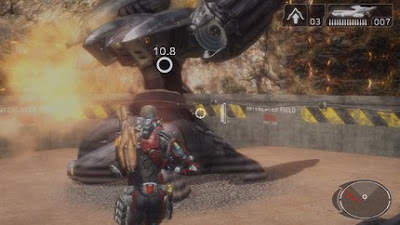 You play as a battle scarred soldier of the technology loving soldiers.  The game is split into 3 chapters, each being a few hours in length.  First you are pursuing Sheridan, then later discovering his secret weapon, before finally getting the means to destroy it (it being a humongous gigantic crab like robot base which has free thought)

The weapons in the game are quite cool.  The usual suspects are here under different names (Shotguns, sniper rifles, and machine guns etc) but also different weapons.  There is a lode gun that creates a mini vortex that sucks objects and enemies into it, there is a gun that fires mines that burrow into the ground before exploding, and missiles that fly under the ground before bursting out and exploding among others. 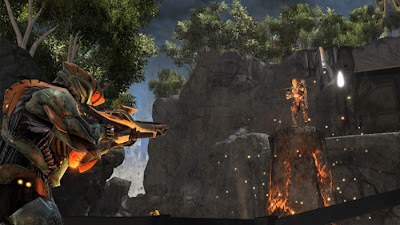 The Pacifican soldiers are fun enough to fight, as well as the normal grunts you also get special classes with unique abilities.  Cheetahs are able to pretty much teleport, flaming soldiers armed with rocket launches can jump tremendous heights, while heavily armoured soldiers fire green explosive blobs at you.  There is only really 2 proper bosses in the game, and these are disappointingly exactly the same pretty much to fight.

The ability to higher and lower ground is put to good use, better than reviews suggested.  highering ground can protect you from gun turrets, create bridges over poisonous rivers, and can even be used to crush enemies against ceilings!  Lowering ground can create safe trenches for you to hide in, as well to make small buildings collapse, and tunnels to be better traversed. 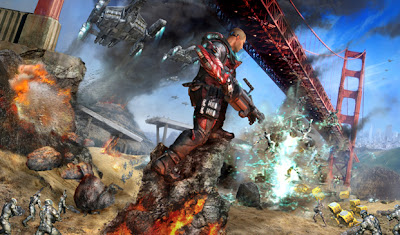 The game is well paced level wise, though it does put in a pointless and boring driving level.  Your vehicle can create ramps to jump off, as well as dig under narrow bridges, but the level for the driving stage is boring, and over long.  The end of game boss is a nightmare, but there's a glitch (which i used) that makes all its attacks useless.  The plot is silly, and not explained very well, it's kinda inadvertently funny that if you ever have other soldiers with you during cut scenes they will almost always be conveniently killed off just before the next level starts.

The game looks good, but overall is a tad generic.  It was fun enough and what I expected.  For £5 I can't complain.