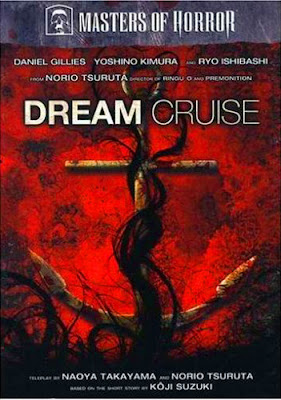 Dream Cruise is the Japanese effort for Season 2 of Masters of Horror.  It is directed by Norio Tsuruta whose films I have never seen (include Ringu 0, and Premonition).  The episode is a ghost story, told in that creepy Japanese style.

The episode revolves around 3 characters.  An American Attorney, Yuri the woman he is having an affair with, and Yuri's rich husband.  They are together on the husbands small luxury boat.  He is a client of the attorney, but it becomes apparent that he knows about the affair that is going on with his wife.  Before things come to a head though the boat dies.  Stranded in the ocean with no chance of help things get worse when the vengeful spirit of the wealthy mans first wife appears to get her unholy revenge on those she sees responsible for her watery death. 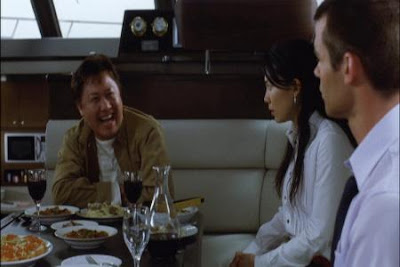 The majority of the episode is confined to the small cruise ship The Yuri.  The 3 characters interactions are really good, and as a threesome they play off each other well, each knowing the secret of the affair, but none revealing that knowledge.  What first seems like a episode that is going to be about the wronged husband turns into something more with the arrival of the evil spirit.  The spirit is creepy in the usual Japanese ghost way; a woman with lots of dark hair covering her face.  The woman looks quite slimy, her skin and clothes having a sticky sheen to them, and her skin glowing slightly green.

The episode works very well, the small location never getting stale, the creepiness comes and stays.  I don't know what it is about Japanese horror, but it always scares me far more than it really has any right to.  It is no exception here.  While not terrifying, it is definitely the most creepy tale of Season 2 (not that that has been hard).  Though filmed in Japan most the episode everyone speaks in English though this is plausible with an American character who professes to not knowing much Japanese.  The acting is of a good standard, Daniel Gillies seems a very serious focused actor who really wants the episode to be as effective as possible.  Japanese horror is nearly always good from the moderate amount of it I have seen.  Well worth a watch.