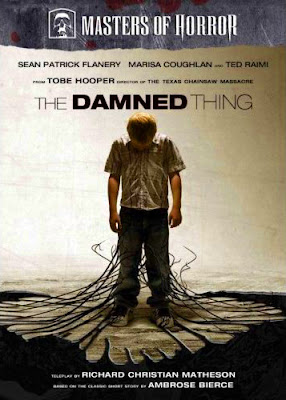 The Damned Thing is Tobe Hoopers (The Texas Chainsaw Massacre) episode for Season 2 of Masters of Horror.  It is at it's heart a monster story, but with lots of madness inspired horror also.

Sean Patrick Flanery (The Boondock Saints) stars as Kevin; Sheriff of a small, slow paced Texan Town.  In his childhood he witnessed a horrific incident at his family home where the arrival of a black oil type substance led to his Father becoming enraged, gunning down Kevin's Mother and then pursuing Kevin in a bid to kill him also, before being ripped apart by an unseen demonic force.  24 years later it seems that whatever happened that night is going to occur again as the Townsfolk slowly descend into violent madness killing themselves and each other in nasty ways.  Kevin's aim is to escape the Town, along with his young son, and estranged Wife while avoiding the madness that is sweeping the place. 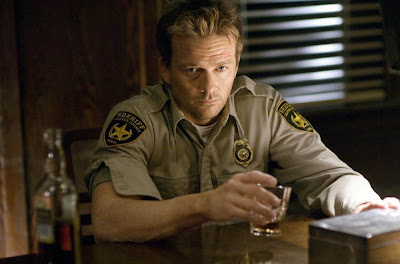 The film is at times very heavily similar to John Romero's The Crazies, with Townsfolk being insane it's not hard to see the likeness.  Unlike that film though there is no outside intervention, and has a supernatural cause.  The plot is exciting, but it does appear that the script writer had no idea how to end the story.  There is quite a lot of violence in the film, most of note is a carpenter who beats himself to death with a hammer, and a woman whose body got sliced in half after a car crash.

The characters are interesting, and some of them you even come to care about.  The Sheriffs inept almost comedic friend (can't recall the actors name; he was one of the main characters in Freddy VS Jason) brings a light side to the episode which is mostly bleak.  A villain of the piece comes about in the form of a crazed Priest played with gleeful malice by Ted Raimi. 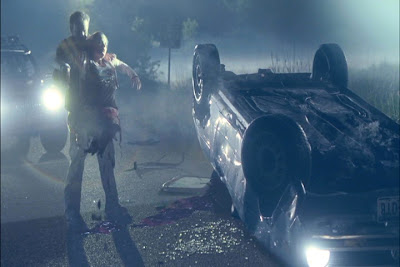 The film falls apart at it's end with a very low quality CGI oil monster appearing looking very fake, and as mentioned the lack of a conclusion.  The setting of a dusty small Town is well done, and the violence is cool, so overall a pretty enjoyable episode.

Posted by Daniel Simmonds at 04:39