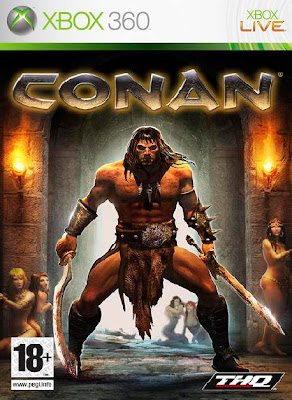 Recently I got Conan for the 360, it only cost me £5 so my review is tainted by this fact. Conan is a 3D brawler with slight platforming sections, obviously based on Conan the Barbarian. Think God of War or Golden Axe: Beast Rider.


The story starts with Conan at an ancient ruin treasure hunting. After fighting past ghosts he gets to the central chamber and to his reward. Instead of gold though he accidentally unleashes a powerful sorcerer who had been imprisoned there. Waking up several days later on a beach he finds all his armour has been stolen, and no clue as to how he got there. He soon teams up with a woman called A'Fanna. She tells him a black plague is sweeping the lands, infecting everyone and turning them into mindless psychotics. He discovers his missing armour is the cause of this spread, and that it has been cursed by the Sorcerer he mistakenly freed. Conan must acquire all the missing armour, and then hunt down the Sorcerer to end the misery. 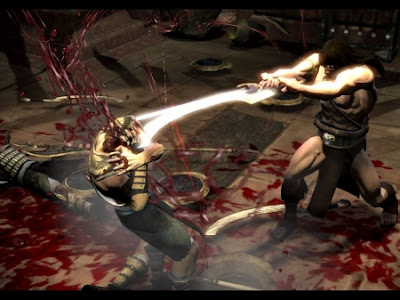 The Conan books are fantastic works of fantasy. The world of Conan is faithfully recreated here. The locations all take place near the coast, as at the end of each level you sail to the next location on A'Fanna's boat. There are a variety of locations though. Primitive tribal villages, towns, temples, forts are all fought through. Many of the races and locations of Conan's world are mentioned, and Conan himself stays mainly faithful to the character of the book.


There are many different enemies in the game. Mostly these boil down into three different types - weak enemies (who Conan is instantly able to throw around) medium enemies who Conan must stun before being able to do more powerful attacks on, and strong enemies who have unblockable attacks and cannot be thrown. Conan has many many moves, hundreds it seems. Enemies release experience orbs which can be used to purchase new moves from a seemingly never ending list. These include special grappling moves such as tombstones (which pop the poor victims head) as well as instant kill moves such as lopping off an enemies head, or cleaving them in two. Conan can pick up most dead enemies weapons, being able to hold up to two at a time. 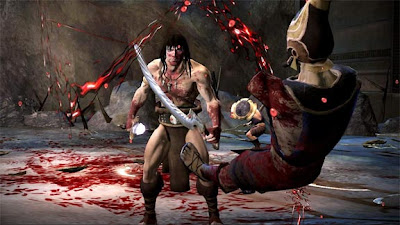 Conan also has access to magic. In the books Conan hated magic, and it seems blasphemy that he would use magic. In the game the reason is that his re-acquired armour is now infused with magic. I think this lets the no magic rule off as despite being magical the armour is his, and I think he would be stubborn enough to keep the armour despite it now being magical. There are four types of magic Conan can use each using up more magic. He can turn enemies to stone, rain down a meteor shower on enemies, unleash a horde of hellish crows, and create a mini black hole to swallow up enemies.


The bosses are the games highlight. Each is a joy to fight as they are so different and exciting. There is a mix of human and monster bosses. One boss will see you fighting a snake sorceress at the top of a temple, while another will see you in a running battle against a sand dragon in the ruins of a long dead civilisation; fun to do. The game is also quite gory, as well as plenty of blood, there is more impressive violence such as when you cleave an enemy in half there intestines billow out in slow mo, cool! Dotted through out the levels are captured women, these are near naked and topless, sure it is sexist but in keeping with the tone of the books. You get a heap of experience as a reward for freeing these, as you do for finding hidden treasure chests. 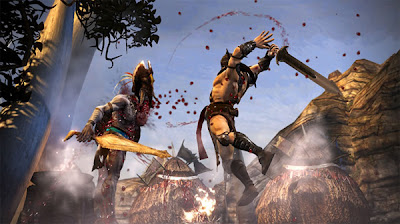 I really enjoyed this game, it helps I was actually reading a Conan book at the same time. This is most like Golden Axe: Beast Rider but unlike that this never gets boring, and has great checkpoints dotted all through the levels meaning you never get frustrated at having to replay large chunks of the game.