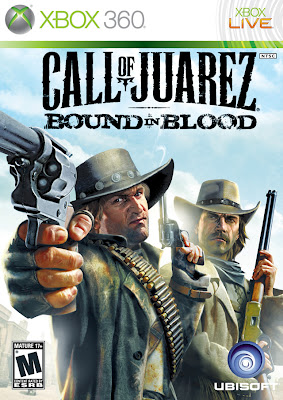 Call of Juarez: Bound in Blood is the second game in the series, it is a prequel to Call of Juarez and centres around the rivalry between two violent brothers - Thomas and Ray (Ray being one of the main characters of the first game). The game again is a FPS, with most levels letting you select either the nimble Thomas, or the strong Ray. I realise this game is not remotely horror orientated unless you class it as real life horror, it is very defiantly a Western, and has no real place in this blog (I don't know why I reviewed it).

The game starts during the American Civil War. Thomas and Ray are fighting for the South. They disobey direct orders and instead desert fearing for the safety of their young brother, and Mother whose house lay in the path of the North Army. Soon after the war is over, the commanding officer of the South refuses to quit the war, and holds Thomas and Ray personally responsible for the city of Atlanta being lost. Meanwhile Thomas and Ray are travelling with their young Priest brother around America, getting ran out of town after town due to their increasingly violent and criminal ways. They head to Mexico after hearing about a hidden treasure near the Town of Juarez. Along the way they rescue a beautiful Mexican woman called Marissa. As the brothers both fall for her tension starts to boil up between them... 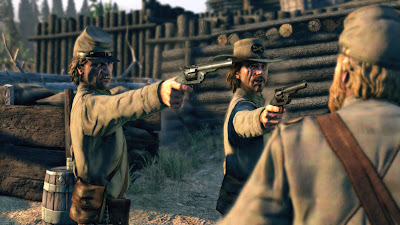 The game starts at the games end with the two brothers just about to have a fight to the death. The younger brother via inner monologue then starts to recount the tale of how things got to this point, how their family was destroyed. The levels are kinda varied, enough variation to keep things from getting too stale. The straight up shooting sections are split up with escort missions, static shooting sections (such as manning a cannon), and driving sections (such as being on a horse, or boat). Most the levels can be played by either of the two characters. Thomas can use his lasso to get to higher sections of level, and he has excellent rifle skills. Ray can kick open locked doors, and use dynamite leading to slight level variations. I pretty much used Thomas all the time for his rifle skills.

There is something about the game that just isn't right, to me there was something missing that made it feel like a proper Western. I am not quite sure what it is that was missing. The music in games such as Red Dead Revolver is really exciting calling to mind classic Westerns like High Plain Drifter, here the music is just bland, it is in a Western style for the most part, but just quiet and meandering. High action points bring in a almost modern sound which jars with the setting, having a fast drum beat just feels out of place. A few levels are open world where you have a series of missions you can do in any order, over a large landscape. These two levels feel really out of place, and are mostly completely empty, and just feels like it's from a different game entirely.

Enemies include American Indians, lawmen, and bandits, but all act the same way, and look quite similar. Locations as mentioned are varied taking in ghost towns, forests, and forts, but they feel like levels rather than locations. The highlight was a level set on the side of a giant mountain which was a great location.

The game is ok, just not brilliant. There is something just not right with the game, whether it's the unlovable characters, janky music, or lack of variety I just can't tell. An ok game, but not great, least it's not bad I guess.

Posted by Daniel Simmonds at 12:11