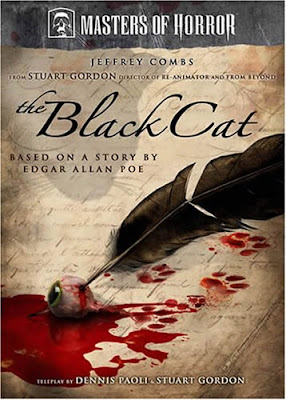 The Black Cat is directed by the main who directed Re-animator; a HP Lovecraft adaption that I have never seen. The Black Cat story is well known and is faithfully recreated.


The main character of this piece is Edgar Allen Poe, he is suffering awful writers block, and his beautiful young wife is slowly being killed by a disease; the white plague which he cannot afford to buy medicine for. To top things off his wife's cat; Pluto is doing his head in, he blames his problems on it, and eventually plucks out its eye, then when his wife dies he hangs it. His dead wife miraculously comes back to life, as does the cat which just wont die and seems to have a grudge against Edgar. Finally he takes an axe to it, but misses and accidentally kills his wife. Traumatised, but not wishing to be jailed he bricks up his wife's corpse in the cellar. The Police visit and are just about to leave when a meowing draws them to the bricked up corpse - the cat had been bricked up also and revealed the crime! 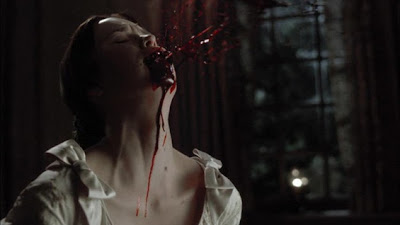 A classic story, when of Poe's best. The twist in this one is that it is Poe himself who is living through the tale, though at the end it is revealed to have been a dream, a dream that inspires him to write the tale.


The acting is of a very high standard throughout, especially Jeffery Combs who is fantastic as Poe and bears a close resemblance to the real life Poe. There are some truly gruesome effects used, especially the wife when she has an axe embedded in her face and is flailing around with her face split open trying to remove it. The part when the cat is discovered in the wall is especially well done, as the cats meowing really does sound like a woman's scream and is genuinely creepy when they pull down the wall to find the rotting corpse of the wife with the cat on her head screaming. 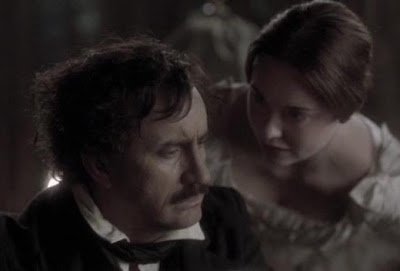 The whole episode has a real washed out look to it, nearly black and white, with just flames, and blood being vivid to really stand out. A greatly done adaption of a fantastic story!