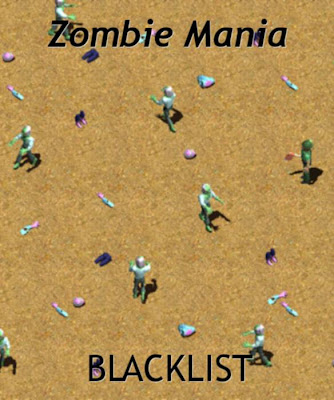 There has been 3 zombie games released so far this week on the Indie game channel. This is not a review of one of them...

Zombie Mania is basically a Pac Man clone. You are a woodcutter, in a medieval town. The aim of the game is to collect body parts while avoiding the zombies. Dotted around the levels are also Axe's (power pills) these give you the temporary ability to chop up zombies. Rather than the single screen of Pac Man the view is much more zoomed in, so that the level cannot be seen all at once. Each level is larger than the one before, the zombies become faster, and the body parts more numourous.

The game looks ok, it is nothing special, but is medieval style with dusty ground and European style house comprising the walls of the maze. A meloncoly piano track plays during the game, it is simple but effective. The groans of the zombies are constant, and sound cool.

It would have been useful to have a mini map so that you can see where body parts of still waiting to be picked up. Also, the isometric houses that make up the maze sometimes obscure the body parts making it annoying when you are randomly walking round the maze hoping to find one last body part hidden by a building. The game is quite hard, and unvaried, but is worth playing if your into zombies.