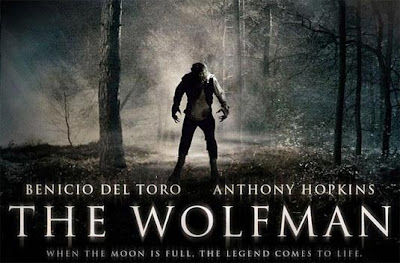 First of all, the cinema I saw this in was the hottest cinema ever, the heating was on full blast, and it was packed with people, there were literally people bursting into flames. As a result I could not wait for the film to end, so that might be reflected in my thoughts of it.


The Wolfman is a Werewolf film *shock*. It stars Benicio Del Toro as Lawrence Talbot. He has returned to his family home after many many years after hearing via his brother Ben's fiancee (played by the beautiful Emily Blunt) that his brother has gone missing. Upon arriving he discovers from his weird distant father (Antony Hopkins) that Ben was found dead, seemingly due to a wild animal attack. Lawrence decides to stay and discover just what really happened. Before long he has been attacked by the animal, and discovers to his horror that he is now a Werewolf. 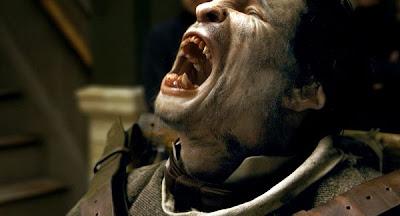 The film is quite average to be honest. It is set in oldie style England, and looks the part, but the plot is very obvious with no real surprises. Del Toro brings nothing to his character, neither likeable, or dislikeable, which makes it hard to understand why a love story develops between him and his brothers fiancée. Hopkins is ok as the distant Dad, the rest of the cast are quite bland also. Hugo Weaving is the exception though, he is great as Inspector Abberline, and brings a cool factor to the character, remaining calm when everything goes to Hell, and also being flawed in his narrow views.


There is lots of cool violence. Heads are severed, limbs are torn off people, intestines spilt. Despite this though there is a lack of blood which reduces any sense of realism. Corpses look fantastic, but not so much fresh violence. Some inventive ways of killing people.
The Werewolf is great until you actually see it. It reminded me of Teenwolf, the Werewolf still being mostly clothed, the transformation effects are impressive though. I know it's based on the look of the Werewolf in the classic Universal original, but meh anyway; Cool teeth though! The Werewolf action scenes are the highlight of the film though, especially the exciting running battle between the Werewolf, Abberline and his Officers in London.


An ok film, but nothing special, I will admit that I'm not the biggest fan of the Werewolf as a monster.