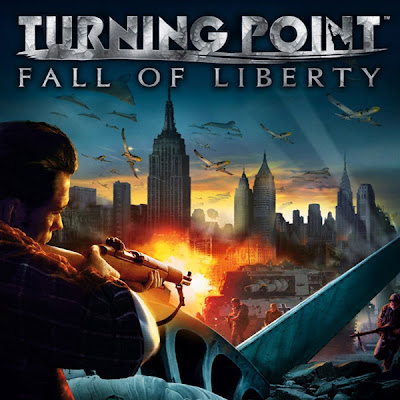 I realise I have been doing nothing but videogame reviews for a while now. I will be doing some more real horror reviews quite soon. Turning Point is a terrible terrible game! I have that out my system, so on with the review.

Turning Point takes place in a alternate reality where Winston Churchill died after a car accident in the 1930's. As a result of this the Germans conquered all of Europe and Russia, and the USA never entered the 2nd World War. The game starts with the Nazi invasion of America. You play as a construction site worker in New York who joins an underground resistance to fight off the German threat.

The games first level is fantastic. You start off on top of a huge skyscraper construction and get to see the attack by the Germans. Hundreds of planes fly overhead, along with Nazi Blimps. They lay waste to New York with explosions and collapsing buildings everywhere. Followed by parachuting Nazi's. It is a real spectacle, one thing the game has going for it is that it looks great, the graphics are really good I thought. The levels throughout the game are quite cool. Other locations include the White House, and London Bridge.
The enemies consist of Nazi soldiers. Some resemble the Helghast from Killzone, wearing gas masks with glowing orange eyes. These are all human enemies, and just vary in terms of weapons they carry. They do have an annoying habit of spamming grenades at you all the damn time. 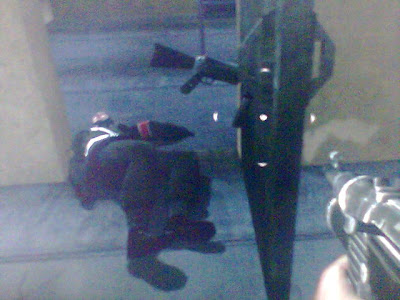 The game is a joke, it is a last generation First Person Shooter (FPS) dressed up in its older brothers clothes. Everything about it is so old in feel. Stupid things like your character never changes his clothes from the construction ones he wears at the start of the game. The enemy A.I is bad, enemies standing in plain view rather than attempting to avoid your attacks. The game is also buggy as hell which caused a lot of unintentional humour. At one point I had a NPC whose walk animation had broken, so it looked like he was skating everywhere, really funny seeing him walk repeatedly side to side like a crab. Enemies sometimes float when killed, weapons they drop get stuck in objects, sometimes they forget to react to your presence. Enemies sometimes become bullet proof and can't be killed. Buggy. As. Hell. Also the game from start to finish on normal lasted just 3 hours, so short! 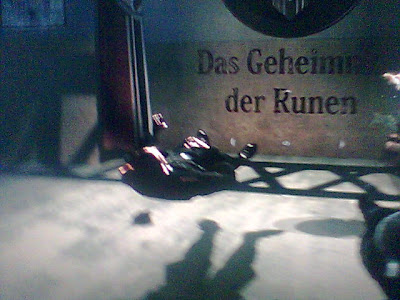 The game features online multiplayer which a lot of the achievements are tied into, but the servers have been turned off due to no one at all playing the online aspect I would guess. I got this for £5, It is a fun game, just hideously broken, and will mess up any achievement completest dreams.