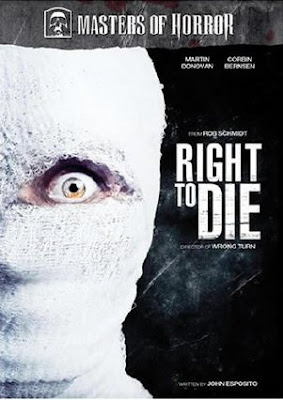 Another day, another Masters of Horror episode review. Right to Die is Rob Schimdts directed effort. He isn't exactly a Master of Horror having only made Wrong Turn previously.


A Dentist and his wife are travelling on a mountain road when a felled tree causes the car they are in to crash. The Dentist; Cliff Addison (played by Martin Donovan) is unhurt, his wife Abby however is torched, suffering over 90% burns to her body. Cliff is told that unless a total skin graft is done to his wife she will not survive. As it is she is in a coma, and burned to a crisp, covered head to toe in bandages. He decides he will let her die. While at home Cliff is visited by a ghost of his wife who rapidly burns up to become a charred husk. He soon realises that though his wife is in a coma she is able to leave her body. Not a good thing to have a powerful ghost as a wife when your not exactly a fantastic husband...


The effects in this episode are fantastic, especially the charred thing that is Abby, she is covered in red and black goo, and really does look like she is burnt up, every scene she is in is fantastic, she is a really repulsive grim monster. There is a scene in which a character is skinned alive, very gross, and very well done, fantastic insert shots, and really good special effects.


None of the characters in this short film are likable, all are deeply flawed. The husband Cliff has secrets which make him pathetic, his best friend a lawyer is money hungry, while his assistant at the Dentists is a slut. It does hinder the story a bit that there is no one to root for. The female characters of Abby and the Dentists Assistant are very attractive though, and yes there is quite a bit of nudity with them which is appreciated!


It seems if you boil a Masters of Horror episode down to its base components there will nearly always be lots of blood and violence, and lots of nudity. This is a good episode, would have been great if it had seen fit to insert a likable character into the plot.

Posted by Daniel Simmonds at 12:43