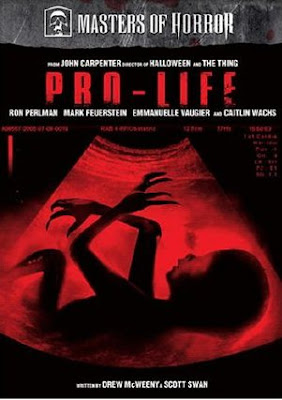 Pro Life is John Carpenters 2nd Master of Horror episode. It is a siege style film with monster elements. It is not that great.

A God obsessed and anti-abortionist man (played by Ron Perlman) with his 3 sons lay siege to a Abortion Clinic where his heavily pregnant 15 year old daughter has seeked sanctuary. The man believes he is on a mission from God to protect his daughters unborn child, and so sees it fine to kill anyone who gets in his way. Meanwhile the daughter is trying to convince the Dr's in the clinic that she was raped by a Demon, and that her child is evil and needs to be killed. A silly story which doesn't get any better when she gives birth to a half human half crab thing.

The problem with this is that it all feels very cheap. Everything from the music and sound effects to the effects looks very budgety. Ron Perlman (most famous for playing Hellboy) looks lost in his role and admits as much on the extras when he says he didn't understand his character. He is about as scary as a wet blanket, and his sons are no better either, being skinny runts. It is hard to find anything about it suspenseful or thrilling when the bad guys are just not remotely threatening. 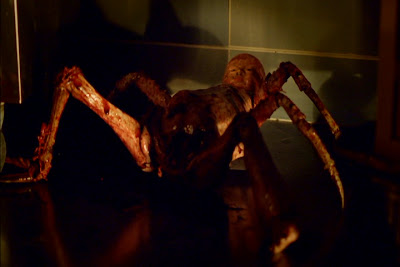 The plot is very basic, and has some big holes. At least 5 characters wander off screen never to be seen or referenced to again (including rather bizarrely Ron himself, supposedly the main bad guy) It feels like scenes are missing and incomplete. This a poor episode.

Some plus points then. The crab/baby looks kinda cool, though a bit too much like a face hugger. I guess Abortion is a touchy subject, and it doesn't preach either way on the subject. Sure Ron's character is wrong, but his pro-life views on abortion hold up. Likewise pro-choice is also not dismissed, with the Dr's not being portrayed as evil. Cigarette Burns; John Carpenters other Master of Horror episode is much better, this is silly, but still I wouldn't say dismiss it entirely, just don't expect anything amazing.