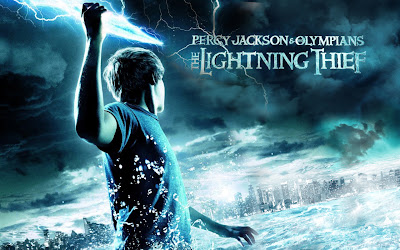 
Basically the God Zeus has had his Thunderbolt stolen. He blames it on Poseidon's Son and says unless he gets his Thunderbolt back by 10 days time then there will be a war between the Gods (basically Armageddon). Poseidon's Son however has no idea of any of this, as far as he's concerned he is just a High School Student. He soon gets dragged into events as a Fury attacks him, his best friend reveals himself to actually be a Satyr Protector, and himself to be a Demi-god. He heads off to a place of safety a special Camp for Half bloods. Along the way however his Mother is kidnapped by Hades. Teaming up with Grover his Satyr friend, and a girl Annabeth (the daughter of Goddess Athena) they must travel across America to get 3 magic Pearls, and then head to Hell to rescue Percy's mother using the Pearls to escape Hell. 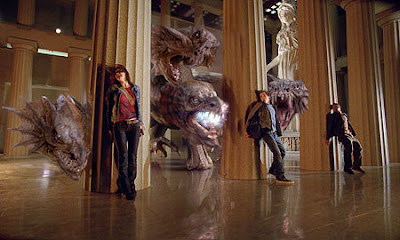 The film is only a PG, but is full of Monsters, fantastic looking scary monsters at that! This is an action packed film. Monsters featured include a Minotaur, a Hydra, Medusa, Hell Hounds among others. The film has a slight feel of a road trip and takes in such locations as Hollywood, New York, and Las Vegas. The acting is of a high standard, something I was surprised at as had expected Harry Potter style dreadful acting. Quite a few famous actors also show up in the film. Zeus is played by Sean Bean, Percy's History teacher is played by Pierce Brosnan, Medusa is played by Uma Thurman, and Steve Coogan plays Hades.
The plot is exciting, and while slightly basic, does rollick along at a fast pace. The characters are well cast, at times Grover does become a comic relief which grated a bit, but least his character isn't completely useless like most comic relief characters. It is quite a dark film in places as well and doesn't shy away from death, I'm sure if I had seen this as a kid it would have frightened me! The special effects are ace, and the film as a whole looks really good. Let's hope they do a sequel!

Posted by Daniel Simmonds at 12:45