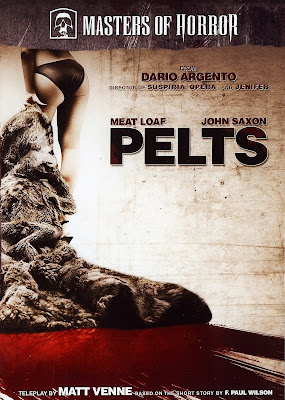 Pelts is the first episode of Season 2 of the excellent Master of Horror; the series where each episode is directed by a different Master of Horror (hence the title). Pelts is Dario Argento's 2nd episode he has done, the first being the great Jenifer in the 1st season. Pelts is very bloody, and disgusting! I nearly had to look away at some scenes!


Meatloaf plays a Boss of a fur factory, when not at work bullying his employees he is at the nearby strip club obsessing over one of the strippers. They know each other well enough due to him repeatedly buying private lap dances off her. She dislikes him and repeatedly lets him know that no matter how much money he throws at her, he has no chance (what with him being a sleazy, fat, unpleasant man). One of his contacts; a hillbilly trapper informs him that he has gotten hold of some absolutely beautiful Raccoon pelts which the Boss uses to create a wondrous fur coat in order to win the stripper he is obsessed with. Unfortunately the Raccoons were captured in the ruins of a creepy ancient civilisation. It seems the pelts are now cursed, as all who come into contact with them end up dead in the most bloody ways imaginable... 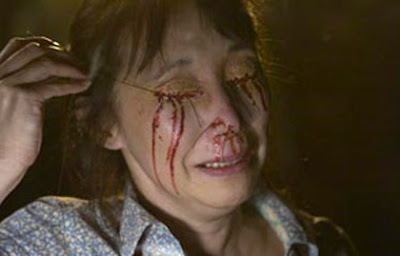 As with Dario's other episode this is full of violence and nudity. The violence is all self inflicted, the victims of the pelt possession are induced to kill themselves in gruesome ways. One person sticks his head in a bear trap, another sews there eyes, nose and mouth shut causing them to suffocate to death, then there is the fantastic final sequence in which madness takes place in an apartment block.
None of the characters are likable, all are shown as being shallow, greedy, and weak. I think this was intended for definite, everyone gets what they deserve. The plot is a classic one, but done in an interesting way. The music is fantastic, as are the special effects which are grim to watch.
I really want to see some of Dario's classic films, as going by the episodes I have seen he is a fantastic director. A shocking first episode of the 2nd season. Here's hoping the rest of the episodes are as memorable!