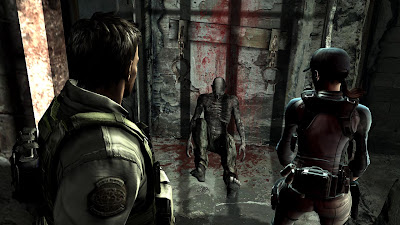 Lost in Nightmares is the first of two planned extra missions for Resident Evil 5. It is set in an entirely new location, featuring new enemies and characters.


The mission involves the infiltration of a mansion where Oswald Spencer (The founder of Umbrella) is hiding out. During Resident Evil 5 this was shown in flashbacks, now as either Jill Valentine or Chris Redfield you get to play through it.


The mansion is a great location, it is similar in design to the mansion from Resident Evil 1, and so there is lots of nostalgia for the Resident Evil fan. Resident Evil has never looked better, this game looks, and sounds amazing. There are a few cheeky references to the original game as well which are much appreciated. The new enemies are cool, and fit into the location well, not feeling out of place, and include zombies! New Journals give more insight into the back story of the place.


The game is scary! Not since the original game has the series been properly horror based. It helps that for a significant part of the game you are weaponless, stuck in a maze like flooded basement being stalked. Take away the powerful weapons and Resident Evil can be a fearful place.


At 400 Microsoft points this is cheap, but bear in mind that it is only around a 30 minute experience, and if you are looking for lots of action you will be disappointed as this is more based around simple puzzles and atmosphere. The next downloadable bonus mission I would imagine is going to be a hell of a lot more action orientated. If you miss the days when Resident Evil was survival horror rather than pure action then this is for you.

Posted by Daniel Simmonds at 04:25

Maintain the pleasurable content, went ahead and added to my safari feed.