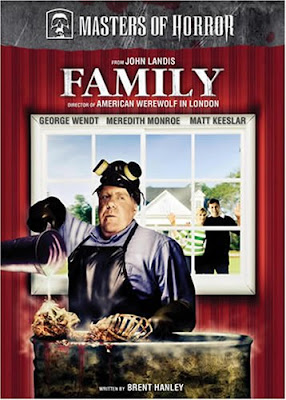 Family is the 3rd episode of Season 2 of Masters of Horror. It is directed by John Landis and is quite a fun episode.

Harold appears to be a mild mannered middle class suburbanite. He lives in a nice friendly neighbourhood, and has a beautifully kept house. Harold is also insane, he kills people, then dissolves them in acid and ties their bones together to make new members for his 'family' a collection of skeletons in clothes who he converses with and spends most his time with. In his head these skeletons are human, and act like any other family. A young couple move in next door to him, and Harold rapidly falls for the young wife. He decides he would like her to 'join' his family... 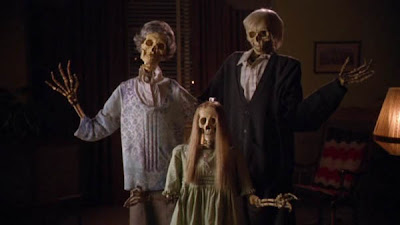 This is a really lighthearted fun bright episode. Most the episode is filmed from Harold's perspective, so the reason everything is so bright and jaunty is because that is how he sees the world, all perfect. Sometimes his family are shown as what they are; skeletons in clothes, other times they are shown as real people, and you can hear the conversations Harold has with them. The episode pretty much centres on the 3 characters; Harold (played by George Wendt of Cheers fame), and his new neighbours (played by Meredith Monroe and Matt Keeslar). All 3 actors are fantastic and perfectly suited to their roles, especially Wendt who seems to have had real fun playing the friendly suburban serial killer.

There is not much violence or gore of any kind shown in the episode, most of the gore centres on already dead bodies. The writer for the script likens Family to his take on Psycho which in subject matter is kind of similar. The ending features a neat little twist which I kinda saw coming, but not completely. The twist sort of changes the nature of the whole episode, so watching it again would give me fresh perspective.
A nice fresh feeling episode, well worth a watch!