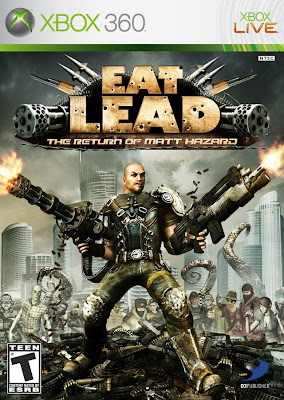 Eat Lead is a comedy action game which derives most of it's humour from games, and the conventions around them. Some of the humour is spot on, but can also not be as humorous as it would like to think.


You play as Matt Hazard. In the game Matt is a videogame star starring in countless games since the 1980's. After a run of ill advised spin offs (such as Matt Hazard Kart Racing) he has been given another shot at an action game. All is going well until he discovers to his horror that he is due to be killed off at the levels end in a 'shock' change for the game. A hacker intervenes to save him. For the rest of Eat Lead you have to traverse various levels as enemies from all Matt's previous games are spawned in and pitted against him in a effort to kill him off on the fictional game company's Managing Directors orders. 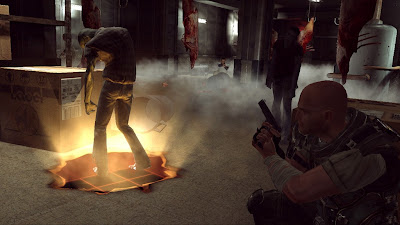 The game is a 3rd person action one. It has a cover mechanic similar to Gears of War, but not as well done. There are many different weapon types, as well as special ammo you can use when you have built up your hazard meter. The ammo comes in flame and ice types.
Humour in games is hard to do well, this game is no different and mostly does fail, but despite this the game is fun, and exciting. The locations are on the most part purposely bland, to demonstrate how so many games are set in bland locations such as warehouse, docks, and Factories, but by purposely having bland levels it makes the game worse than the joke was worth. Where the humour is better is when it references other games. There are digs at Duke Nukem Forever, Final Fantasy among others. Enemy characters include female robots who are the spitting image of Lara Croft (from Tomb Raider), Joanna Dark (from Perfect Dark), and some friendly characters include a Mario lookalike, and a Master Chief (called Master Chef). 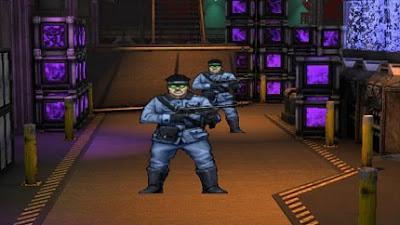 The enemies are varied, being taken from Matt Hazards 'other' games. There are normal humans such as Cowboys and Triads, but also Halo Spartan enemies, 2D Nazi's from Wolfenstein, robots, and even Zombies (can only take them out by a shot to the head!). Quite a few boss battles take place, though some truly dreadful QTE's (quick time events) are used for these.
The game is very free with its achievements. Some of the easier ones include one for starting the game, one for doing the games very short tutorial, one for pausing the game, and a few more 'comedy' achievements awarded for things that were 'left' out the game such as one for non existent multiplayer mode. 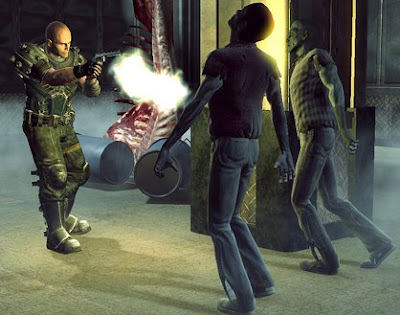 The game is competent, and has some great music, the humour feels a bit poor, and the levels are quite bland. It only cost me £5, I would say if you see it for that price then it is worth picking up, but I wouldn't recommend paying much more for it.

Posted by Daniel Simmonds at 10:24