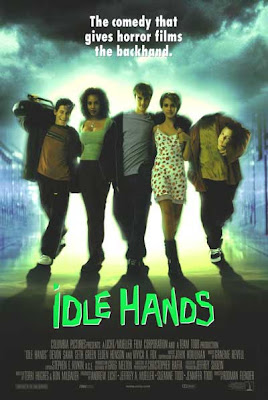 This is quite a funny film, also a bit disgusting though, like Braindead-lite in places. It features a young cast, including the annoying Seth Green who isn't as irritating as he usually is.


There's a saying 'Idle hands are the Devils playground' which becomes true in this film as one of the laziest people in the entire world - a stoner called Anton has his hand possessed by the Devil. At first he doesn't realise, but after murdering his two best friends he does become aware. The hand is very murderous and acts independently of Anton which makes for some really really funny moments. Anton finally in desperation lops his hand off with a meat cleaver, but this turns out to be the very worst thing he could have possibly done... 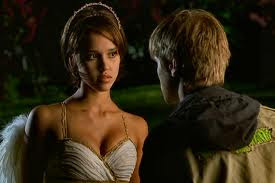 The film is very funny. It is nearly a day later before lazy Anton notices his parents corpses in plain view in his house as he was too busy listening to music and watching TV. His murdered friends come back to life as Zombies due to them thinking Heaven looked kinda boring, despite being dead they are the same as they always were, and being set around Halloween everyone assumes their undead look is just a costume. Anton gets into hilarious situations as he tries to hunt down his evil severed hand, while being chased by a demon slayer, and his metal head friend who think he's possessed, and trying to woo the girl of his dreams (played by the beautiful Jessica Alba) at the most inconvenient of times.
The film has lots of punk rock music as it's soundtrack, and even has the band The Offspring with a guest appearance (the lead singer comes to a grizzly end!) Most the jokes are quite disgusting, but really funny. A cool film, and has zombies in it! I think there may be a sequel so if there is I will check that out.

Posted by Daniel Simmonds at 05:05