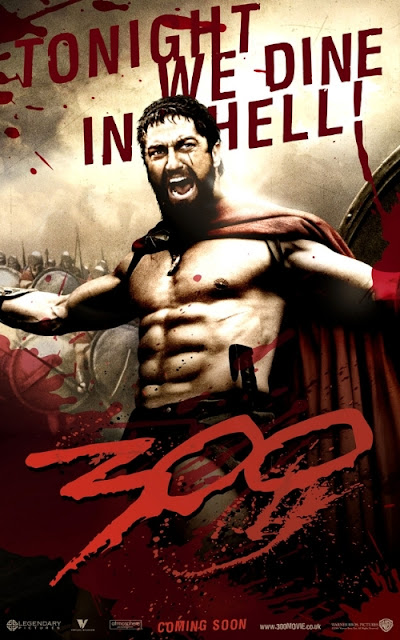 
This film was ace. It passed under the radar for me when it was first out, so picking it up cheap on Play.com I wasn't sure what to expect.


300 is the film adaption of the Frank Miller graphic novel of the same name (Frank Miller also wrote Sin City). I was expecting a unique look to the film, and it didn't dissapoint. The world of 300 is set in mythical ancient times. Part real history and part fantasy. The Spartans (led by Gerard Butler) discover that the biggest army the world has ever known is advancing on thier Kingdom. The mantra of the Spartans is 'No retreat, no surrender, no mercy' so Gerard (I really can't recall his characters name as it's a really long Greek name) refuses to plead for peace, and instead decides to go to war. The law states that the Spartans can only go to war if the Gods grant thier blessing. The corrupt oracles fix it so that permission to go to war is denied. With his hands tied, and not wanting to let his Kingdom just lay down and die he gathers 300 of his top Spartan Warriors and heads off to fight the unstoppable army on his own.


The Spartans are really really badass. I mean they are so amazingly powerful, most the action comes from them defeating wave after wave of the enemies forces. Being part fantasy it is not just normal humans they fight, but also giant mutant humans, mutant animals, and magic casters. While the Spartans fight there is a sub plot back at the City with the Kings wifes plan to speak to the City's version of parliament to get them to agree to send the Army to confront the invading Army and save the 300 Spartans.


The film has a lot in common in feel to Gladiator. Obviously it's a similer time period which is a big part of that, but also in the corruptness of those in power. The film is tinted to make everything seem kind of golden and unreal which complements the comic book roots well. The film is kind of Gay in that all the Spartans wear nothing but loinclothes and capes, and being all buddy buddy with each other. I don't mean that in a homophobic way, just as a statement.


I really enjoyed the film, though in places was a bit too predictable. The way the action is shot (lots of 360 degree camera sweeps and slo mo) is real cool, and there is plenty of dismemberment and blood spillage.
Posted by Daniel Simmonds at 07:20