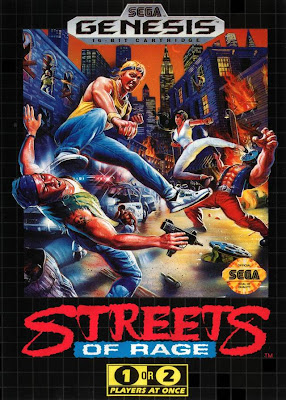 I love the Streets of Rage series! It all started off with Streets of Rage. It is kinda a Final Fight clone, but it is a fantastic game in its own right which stands alone.

An un-named City is in the grip of a massive crime syndicate, ruled by a mysterious man known as Mr Big (Mr X in the later games). The crime syndicate have total control of the city with the majority of the Police force corrupt there is no one to put things right. Axel, Adam, and Blaze resign from the Force and decide to take matters into their own hands fighting their way to Mr Big via the...Streets of Rage. 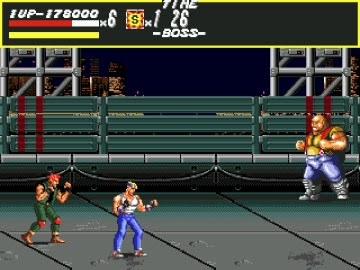 The game is a scrolling beat em up which comprises of 8 levels. The levels take in such locations as a boat, a factory, a beach, and finally ends with Mr Big's penthouse. Each level ends with a boss battle. The bosses are all memorable, and require different tactics for the most part. Bosses include a fire breathing fat man, a Wrestler, a man with Freddy Kruger style claws among others. The normal enemies are quite varied as well, and act differently. Jugglers will fling objects at you, Ninjas can throw you, while Prostitutes will attack you with whips. The music is fantastic, all rave and dance style stuff which fits the ultra violence well.

The 3 characters have different strengths and weaknesses. Stupid Adam (stupid as he is kidnapped in Streets of Rage 2) is strong but slow, Blaze is fast but weak, while Axel is a mix of the 2, but his jump kicks are pathetic, making the Blaze's sisters boss battle particularly difficult in single player. Each life grants you a smart bomb in which a police car will pull up and fire a mortar/Gatling gun killing all enemies on screen.

The very best thing about the game is the fantastic bad ending. Like Double Dragon's co-op game you get to fight each other at the games end. Well just before in fact. Upon arriving at Mr Big's throne room he asks you both if you want to join his army. If one player says yes, and the other no then they fight each other. If the player who said yes wins, then Mr Big again asks the player if they want to join his army. If the player selects no and defeats Mr Big an ending shows with the player sitting on a throne, and then with comically bad animation starts to laugh while sinister music plays and the end credits scroll. Amazing!

The game can be found on the Virtual Console, as well as many Megadrive collections, definitely worth playing!

Posted by Daniel Simmonds at 07:10