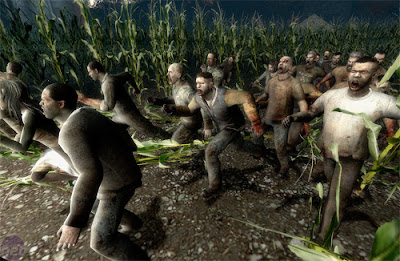 Here is the first in a new series of affectionate and quaint looks at some of the best moments in zombie horror, induced with a splash of that oft called style and wit from the pen of the mighty Daniel Simmonds. Enjoy;

"Cor Blimey Guvnor thems a right pickle we're in and no mistake!" said Toby the chimney sweeper. "I would heavily agree with thee, this is a most unwelcome zombie apocalypse" Makintyre replied with a weary resignation. They had started out 4, and were now down by half. Priscilla the street whore had been dragged off into the darkness by the slimy tongue of a Smoker a few blocks back, while Tom, carpenter Tom, yes that Tom, Carpenter Tommy Tom Tomtom the burliest man in Burley had had his face dissolved off by the acidic goo of a Spitter. That bitch had paid though, Toby in rage had took a guitar to her head, severing it instantly of course, the resulting mess dissolved away much more of Tom unfortunately, his dying wish was for them to "run, run, get to a safe house, leave meeeee" or it may of been "help! help!! you bastards where are you going?!"

They were now in sight of the Military gunship, it had promised to air lift them to safety out of New Orleans. Suddenly a Tank appeared, then another, then another. They roared in unison. They in their lumbering way where soon upon Makintyre and Toby flinging them about like rag dolls. "ouch" and "ow" they jointly said, it looked bleak, it looked like the level would have to be attempted again. Out of nowhere Priscilla the street whore appeared, bloodied, but in otherwise good shape. She looked at the beaten and useless forms of the fallen duo as she ran past. The third Tank now focused on her. It ripped a massive slab of concrete out the ground and flung it, it caught Priscilla square in the stomach, crushing her insides to a minty fresh pulp. She quickly took some pills which instantly restored her to feeling well and leaped onto the Gunship. It took to life and roared off to salvation.

A note on the fan fiction; obviously that was a very emotionally charged story, I think you always have to put a bit of yourself into these things, it brought up a lot of painful memories for me, as can be seen by the thought provoking words of Tom, or by the hidden wit of Toby. I feel the anguish of the Tanks is rather explicitly shown, as is the bravado of the Smoker. Or the whole thing could be a load of balls (Not could be, it actually is, lol).
Posted by Daniel Simmonds at 06:15