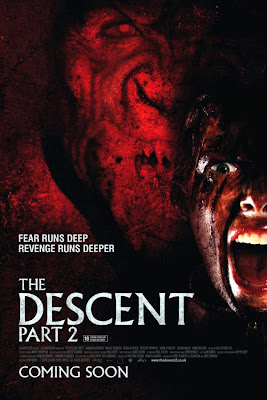 God, it's been a long time since my last post, just been so busy at work that I haven't had time...not that I do posts whilst at work!...? Anyway, I went to the cinema last night, I saw The Descent Part 2. The first Descent was an unexpected hit with me. I saw some awful film from the 70's an age ago which followed a similar situation and had thought it would be the same, but it actually felt quite unique.

Basically in the first film a group of young women go cave exploring in some uncharted caves in America. They get lost, and then killed by a bunch of Albino blind humanoid monsters. No one survives. Yet the sequel sees one of the women escaping the caves somehow (this is kind of confusing as in the European version it is made clear no one survives, only the U.S release had someone surviving). She's taken to hospital where an old, idiot Sheriff forces her to go back underground with him and some cave rescuers to search for the rest of the girls. The survivor has amnesia, and so goes along, soon getting her memory back once yet again trapped underground. Really soon the albino monsters appear and start killing everyone yet again. 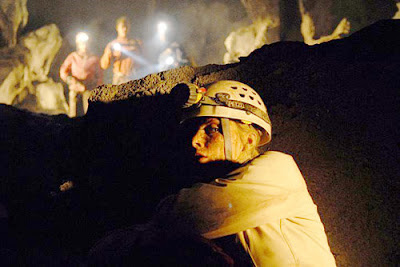 The film is set in the same location as the first, and so many of the victims from the first are still (in one case literally) hanging around. The action starts much more quickly than the first, which kills some of the tension. Also there is no build up of discovering what the monsters are, as they are the same as the first film, so are a known quantity. Again victims are harassed, chased and crapped on (again quite literally) as they attempt to yet again escape. The ending is not great, with an unexpected, yet totally dumb twist. Though a lot of characters are killed off I wouldn't be surprised if they all turn up for the third film, like the apparently dead survivors of the first turn up here.

The film was ok, but the tension and mystery of the first was lost, and as a result is just not really scary.

Posted by Daniel Simmonds at 03:12