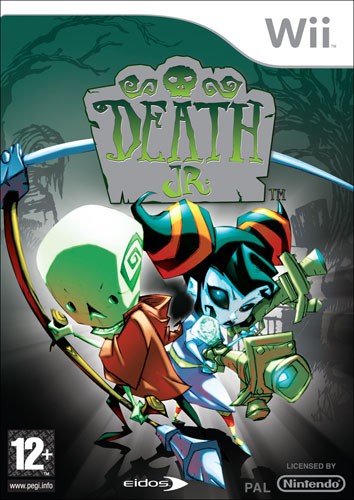 Death Jr is a 3D deceptively cutesy platformer, it is a remake/re-release of a 2006 PSP game. You play as either Death Jr (a skeletal boy wielding a scythe) or Pandora (a goth girl with a bony whip) who accidentally release a evil plant based villain who plans to rule the world. They have to work through about nineteen levels of platforming action to thwart her plans.

I had assumed the game was a kids game, but playing it I realised the humour is much more in the vein of Tim Schafer, and odd ball. The game features odd characters such as a limbless boy in a vat of liquid, and a girl with bleeding holes in her hands called 'Stig-Martha'. The humour is kinda dark in places, and more for a teenage audience (eg: one level is called Morning Woods. I have only played through around eight levels, but it has been quite fun. The first place I did was a toy graveyard, complete with plenty of zombie teddies rising out the ground to attack me. The second location I visited was a science lab, enemies comprised of experimented lab rats. 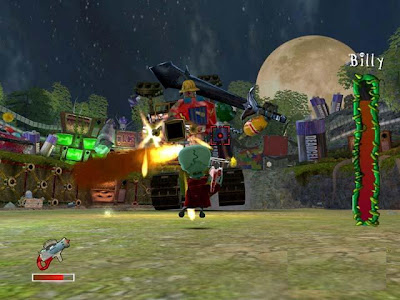 I don't know how the Pandora character controls, but Death Jr controls great. You can use his scythe not only as a weapon, but also as a tool to swing from bars and hooks, to glide across gaps, and to help you climb onto unreachable platforms. As well as the scythe you also get a variety of different guns to use, ranging from pistols, to shotguns and rocket launchers which use the Wii-remote to aim.

The music is excellent, and the graphics are good for a touched up PSP game. The Wii controls which can destroy some Wii games are used sparingly here which really helps. If the rest of the game stays as fun as the first half then it should be cool.

(Part two of the review)
Posted by Daniel Simmonds at 08:42