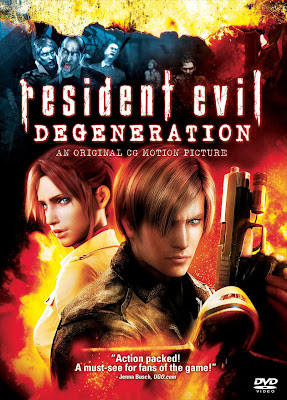 Resident Evil: Degeneration is a Japan made CGI film set in the Resident Evil universe. It is an original canological story that takes place between the events of Resident Evil 4 and 5. The director states he sees it as a sequel to Resident Evil 2.

The film takes place 7 years after the 2nd game. There have been terrorist attacks using bio-weapons around the globe. The T-Virus now being on the black market following Umbrellas demise. An airport Claire Redfield has arrived at comes under terrorist attack via the T-Virus which turns its victims into brain dead flesh eating zombies. The airport is sealed off, and the Governments special agent for biological attacks - Leon Kennedy is called in. He teams up with a special forces woman, and Claire Redfield to stop the terrorist who is a survivor from the Raccoon City Incident (in which a T-Virus outbreak led to the government nuking the City) from getting his revenge on the people he saw as responsible. 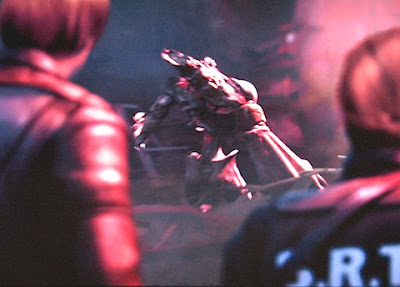 There are two main sections to the film. First the initial Airport attack, and later on the 2nd set piece takes place at an ultra modern research facility where an antidote to the T-Virus has been created. The film is ok, and looks quite good. The characters are all motion captured, so move fluidly, but crawl too much into the uncanny valley.

The plot just falls flat nearly right away. There's no desire to find out the reasons for the attack, the characters are all boring, likable enough, but not fantastic. Really it's just an action fest. There are zombies in the film, sure, but only in the first half, the 2nd half just features a battle with a G-Virus infected human (G-Virus turns the carrier into a mutant monster). A few nods to the games which is nice, but overall just kinda a bland film.