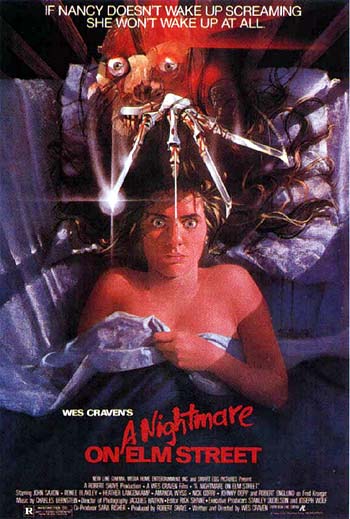 A Nightmare on Elm Street is of course a classic. This is down to what I see as two factors. Firstly it is an original take on the slasher genre. Rather than taking place in reality, the deaths in the Elm Street films take place in people's dreams, the place where they are most vulnerable. Secondly is of course the cult icon Freddy Kruger. A hideously scarred child murderer, with his iconic brown trilby, green and red striped jumper, and of course the glove with those claws. Robert Englund plays the role with relish, and makes it totally his own. Unlike other slashers Freddy has personality, constantly wise cracking, and murdering people in ironic ways, and existing in the dream world makes him much harder to defeat. 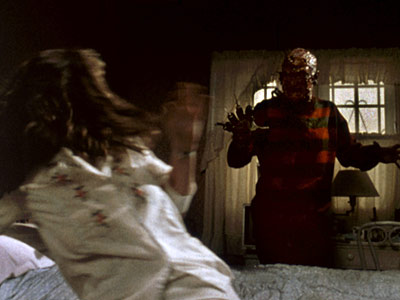 A Nightmare on Elm Street is regarded by many as the best of the Elm Street films. A teenage girl and her friends are plagued by nightmares featuring a man in a stripy jumper, after they start dying off the girl realises it's to do with their dreams, but no one really believes her. After her boyfriend is violently killed in his sleep (the boyfriend played by Johnny Depp in his debut film role) the girl decides she can't avoid sleeping anymore and must confront Freddy to end his reign of terror.

The film is still as ace today as it was then. The deaths are quite spectacular at times (Johnny Depp getting sucked into his bed followed by a torrent of blood gushing out of it up to the ceiling is one of my favourite death scenes ever), and the girls increasing madness due to sleep deprivation is hypnotic to watch. Kruger's backstory and motivation for the killings are interesting and original. 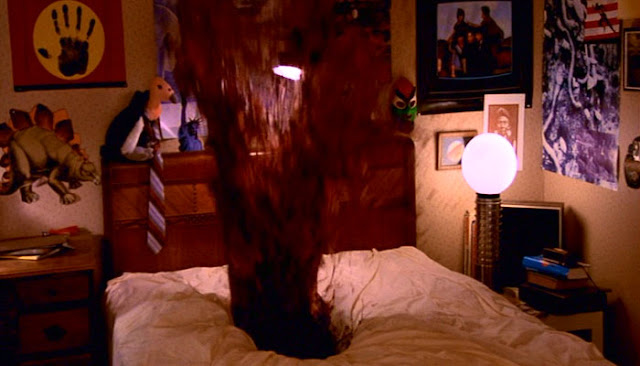 The film is not scary though, I remembered it as being so, but it wasn't. Also the bleak theme tune doesn't fit the style of film, and seems kind of out of place at times. Kind of a token thing in the series; the twist ending is abysmal and made the film end with a whimper. A Nightmare on Elm Street is a definite classic though!

Posted by Daniel Simmonds at 04:19