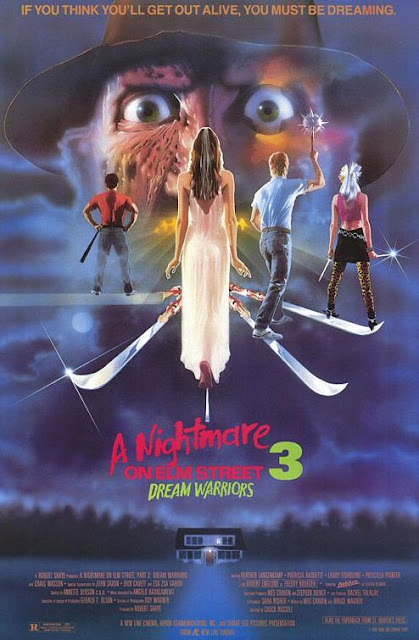 A Nightmare on Elm Street 3: The Dream Warriors is a great film, and Elm Street at its best. A proper sequel to the first one it features the character Nancy (again played by Heather Langenkamp), now grown up and a dream specialist who gets a job at a children's psychiatric hospital specialising in children with sleeping disorders. These include a recently admitted teen girl with physic powers, a disabled boy, a mute, a recovering drug addict among others. All the kids have been dreaming about the same scary man - Freddy Kruger (Robert Englund), and are slowly one by one being killed off by him. Nancy knows they most confront him to stop his murdering rampage, and has to go against the wishes of the other hospital staff who see it all as a shared delusion. The psychic girl is able to pull others into her dreams, so they all go to her dream world and plan to use their dream powers to stop Freddy.
Meanwhile Nancy's Dr friend has teamed up with Nancy's dad (another returning character) to locate Freddy's remains and bury them in consecrated ground which they think will lay his spirit to rest.

The film is very entertaining, and features Freddy in more interesting guises within the dream world. He appears with syringes for fingers, as a giant worm, and even as a puppet. Again he kills people in ironic and entertaining ways, eg; the girl who wants nothing less than to be on TV has her head smashed into one. The special effects are quite good, with a bigger budget being apparent. Back story for Freddy's parents is explained which adds more to how he turned out like he did. The characters are all interesting, and fun, though at times it bizarrely feels like a kids film despite being rated eighteen. 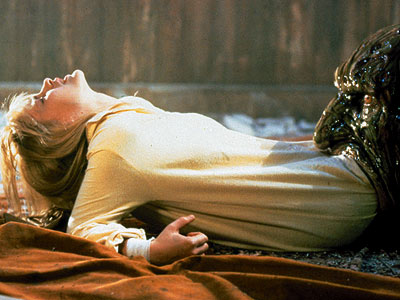 After the averageness of Freddy's Revenge the series came back on track with A Nightmare on Elm Street 3: The Dream Warriors, a definite classic, and doesn't even feature a lame twist ending! My only complaint is that Freddy is supposed to be buried on consecrated ground, but he isn't blatantly, but that's a plot point that gets forgotten.

Posted by Daniel Simmonds at 07:16

Saw this one when it was first released on the big screen. Great stuff. Since you like this movie so much, try a series of books by Graham Masterton starting with "Night Warriors". A full list of all five novels can be found on ISFDB.org. There's also a cheap knock-off called "Bad Dreams" starring the guy who was in the Re-Animator movies.

Thanks for the recommendations! Will get around to checking those out some day.