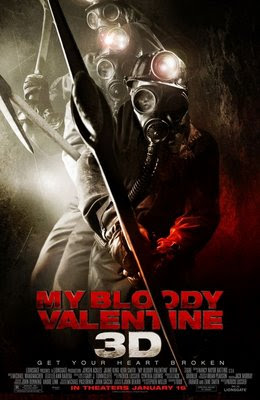 My Bloody Valentine got a lot of press when it came out in the cinema due to being in 3D. It's certainly the first 'new' 3D film I became aware of. At the time I had yet to get my unlimited Cinema pass, so I didn't see it. What I picked up from the TV trailers was that it was some sort of slasher featuring a killer miner armed with a pick axe.

A miner after getting trapped in a cave in went crazy and killed his co-workers. He was rescued, and taken to hospital were he lay in a coma before waking up. He slaughters the hospital staff, heads back to the mine and kills a load of teens having a party there before being shot and presumed dead. A survivor of the incident, a young man called 'Dean' (actually he is not called Dean, but he plays the character Dean in the great series Supernatural) returns to the town after being away for 10 years. His Dad the owner of the mine has died, so Dean has come back to the town he fled from to sell the mine. He finds his childhood sweet heart now married to the towns Sheriff (both these also survived the mine massacre). Soon people start being killed by a miner carrying a pick axe once again. It seems the mad miner didn't die all those years ago. 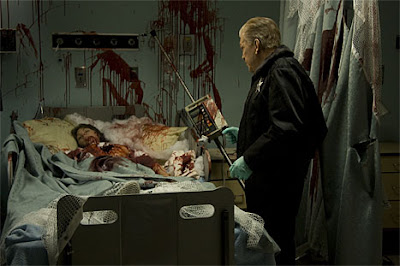 The film is ok, but looses a lot not being seen in 3D as many scenes and effects are set up to take advantage of the 3rd dimension. Bits of people regularly fly towards the screen, as does the point of the pick axe. The plot is kinda basic, and like Sammy in Friday 13th Remake it's hard to see the actor playing the main lead in this as anything other than Dean from Supernatural, though his character in this is a lot more morose and moody.

Right up to the end of the film it keeps you guessing who the crazed miner actually is, which was quite fun to guess who it was. The miner himself looks fantastic, wearing a black all in one miner suit complete with gas mask, but he never comes across as scary.

A fun enjoyable film you can switch your brain off to.

Posted by Daniel Simmonds at 02:47