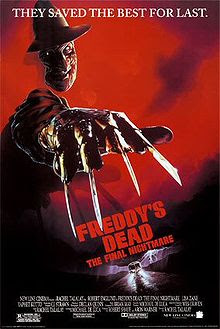 Freddy's Dead - The Final Nightmare is the film in which Freddy is finally defeated once and for all (or had meant to be at the time). A weird message at the start of the film states it is 10 years in the future, every single child bar one in the Town of Pine Woods has been killed by Freddy. The adult population have gone insane over all the deaths, and are in denial that it could be Freddy Kruger. Freddy chases the last surviving child out of the Town so that he can bring more children/teenagers back for him to kill. It is revealed that Kruger had a child who was adopted, he hopes to be able to escape Pine Woods (to which he is confined) by using his child.

There is more back story revealed in this film. Finally a reason for his power is given which neatly explains how he has been able to keep returning after being defeated in each film. The back story to his wife and child is odd in that it has never been mentioned in previous films, but it's cool to see Freddy as a normal human in the flashbacks. You also get to see him as a child in the film which is also cool. 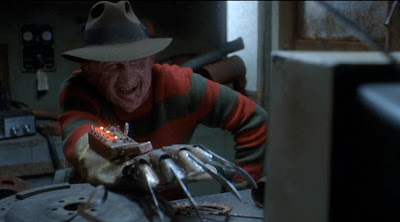 The Town in the film is very odd, it seems really odd that all the Towns people would have been made insane by Freddy's reign of terror, and the whole scene set at the Town fair is just really odd with too much over acting.

The film doesn't look as grimy as previous films, more clean. Freddy Kruger's role is played more for laughs with him breaking the 4th wall by him giving winks and nods to the viewer, he is the least scary he ever was here which is a shame. The way his death is dealt with is not very spectacular either. A good film, but would have been a disappointing end to him if it really had been the last film.

Posted by Daniel Simmonds at 04:03