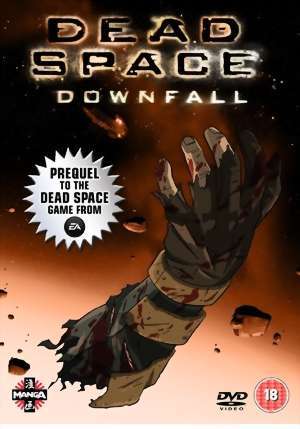 Dead Space: Downfall is a film prequel to the ace 2008 survival horror game. The game Dead Space takes place on a giant 'Planet Cracker' class spaceship called the USG Ishimura. You play the part of Issac Clarke an engineer who has travelled with a small group of others to the ship to investigate a distress call. Soon after getting there monsters appear, lots of monsters.

Dead Space: Downfall is a Manga style cartoon, rated 18. It takes place during and after the events of the excellent comic/web comic. The comic followed emerging chaos and death on a colony. Downfall takes place on the USG Ishimura which is in orbit above the planet the colony is situated on. The story details the origin of the weird virus on the ship and is shown mostly via the perspective of Vincent a loyal leader of a small security group. The crew of the Ishimura are aware of all the madness happening on the planet, so when a small vessel from the colony gets on board Vincent and her crew are assigned to put the occupants of the vessel into quarantine. From here on the ship quickly gets taken over by the virus which morphs the crew into hideous clawed monsters who exist just to turn the surviving humans into zombie-monsters (called necromorphs). 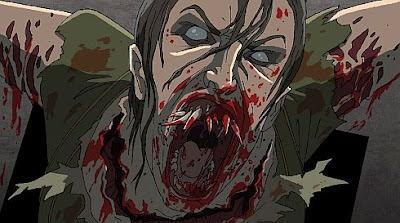 The film is really well animated, it looks beautiful. At times 3D models are used which don't stand out from the regular animation too much, so works well. The film is very violent, and has mountains of blood throughout, but being a cartoon I could not find it scary. There are some cameos from the Dead Space game. Issac's girlfriend turns up briefly, and a prominent character from Dead Space features quite a lot, and even seems to feature the same voice actor. Some of the video diaries found in the game are shown first hand in this.

All the way through I was looking for inconsistencies between this and the other Dead Space mediums. It seems to fit in well, I didn't notice any glaring faults. I have yet to play Dead Space: Extraction (the Wii prequel) which also takes place on the USG Ishimura at apparently the same time as this. So that is one where if there were any inconsistencies they would be shown. 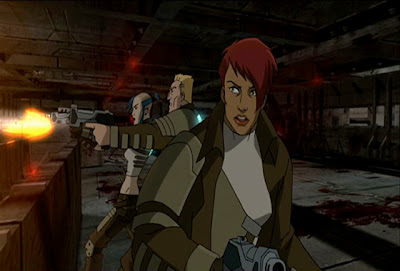 I can't help feeling that if you watched this out of context as a film on its own you would be completely confused as to what was going on. Knowing what went on before and after probably helped me in understanding it. Looks amazing, super cheap (currently), and a great soundtrack. Recommended Sci-fi Horror.

Posted by Daniel Simmonds at 06:08

I've never seen or played the game, but I've seen this movie multiple times and I understood it fine. I just look at it as an Alien/Thing type of movie. Good stuff. I liked.

Interesting to get a perspective from someone who hasn't played the game. I don't know if you play games but Dead Space is a fantastic game.