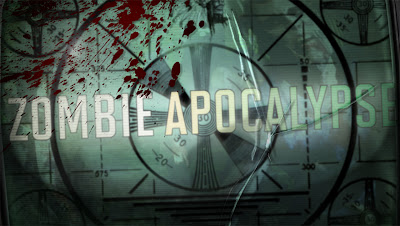 My cheque finally cleared, so I got the X-Box Live Arcade game Zombie Apocalypse. It's a duel stick shooter, in the same style as Geometry Wars. One stick controls your character, while the other controls the gun. It really reminds me of 1 MAD3 A GAME W1TH ZOMB1ES IN IT !!1 (or whatever it's called).

There are 55 'Days' for your chosen character to survive assaults by hordes of literally thousands of zombies, spread over 8 different stages (off the top of my head these stages are Graveyard, City Centre, Carnival, Junk Yard, Log Cabin, Airport, Gas Station...um maybe it was just 7?). Each stage has it's own traps you can use to knock the attacking zombies into (such as furnaces at the graveyard). 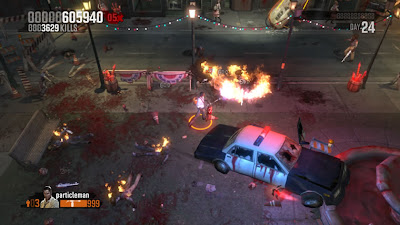 As mentioned there are 4 characters to choose from, but they all control exactly the same anyway. The default weapon you have is a machine gun with unlimited ammo, but other weapons show up through out the levels. These include flame throwers, grenade launchers, shotguns, rocket launchers, petrol bombs and mini guns. There are many types of zombies, and right up to the end of the game new types are being introduced which helps the game from becoming too boring. These range from normal zombies, to weapon totting ones, to the fantastic Pregnant Prom Queen zombies who attack by giving birth to flying monsters.

All stages require you to survive till all the zombies are dead. It is mixed up a bit. Some levels have survivors you must protect until they are rescued by helicopter. If you succeed you get a smart bomb to use. If you fail the dead survivor turns into a nasty running zombie. Some levels require you to only use your chainsaw (you permanently have a chainsaw sub weapon), while some levels put you in pitch black, with a small circle of light around you. There are a few boss levels in the game. These aren't very fun though. Each boss is the same, a fleshy teethy mound which fires laser beams at you as well as annoying hidden teeth things. The game turns into Smash TV levels of hardness for these stages, it's impossible to stay alive. 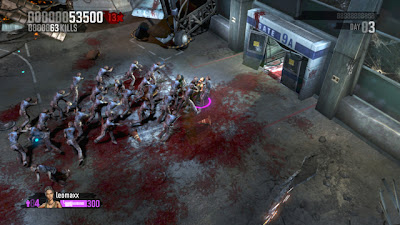 The game is also 4 player online co-op. I played this mode once, it was quite fun, but it crashed after 7 levels. A good game, but it does get boring quite fast, I would have liked some semblance of a plot also.

Posted by Daniel Simmonds at 03:11