XBOX 360 Demos - My Important Thoughts on 2 of them

Without further ado, here is my views of 2 XBOX 360 demos I have played recently. Firstly; Wolfenstein. The previous game in the series Return to Castle Wolfenstein I found maddingly frustrating. The stealth sections in that game just sucked any enjoyment out of it. In fact I actually ended up snapping the game disc in half I was so angry at it!

My views from this demo are positive though. The demo sees you in a train station shooting Nazis. The combat is good, but nothing special, the games mechanics work well, if it all feels quite similer to other FPS's. You have some magic powers you can use such as bullet time. There was an excellant section in the demo where gravity seemed to have been switched off, the Nazis were all floating helpless in the air, so I was able to kill them in a fun way. I also got my hands on a weird electrical gun which evaporated any enemies it hit. The demo was fun, I will buy the game when I see it cheap, and I assume somewhere there will be Nazi Zombies in it. 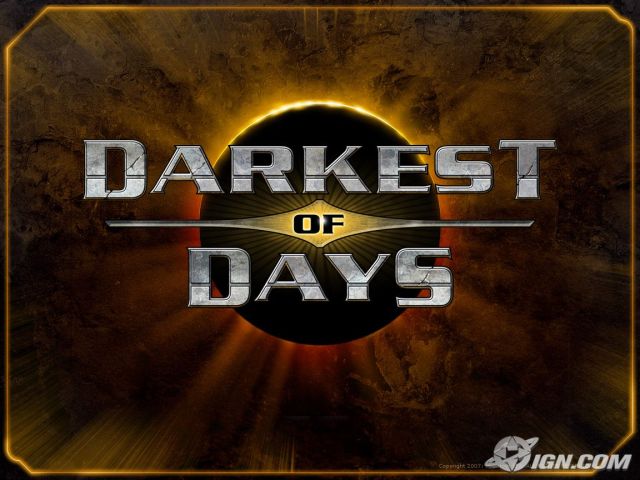 The 2nd demo I unfortunatly played was the horrible Darkest of Days. This is a FPS which sees you travelling through time to different periods. The game starts off with you as a soldier fighting Indians at the battle of little big horn. It was ok, apart from the bland graphics. Then a spaceman randomly takes you away to a futuristic lab, within minutes you are transported to a training ground where some horrible man swears a lot and gets you to shoot Nazi holograms. Then you are transported to the American Civil war where you have a dreadful, though I guess realistic gun which can only fire 1 bullet before needing reloading, and takes about 10 seconds to reload.

This game is awful for several reasons. Prehaps it was cut from the demo, but it seems bizarre a man from the 18th Century suddunly transported through time to the future would not find it the least bit surprising, and without a bit of complaint happily joins the bizarre time travellers cause. The graphics are really bland, and almost last gen looking. The games aims are not well signposted. After a stupid automated section where I could look around but do nothing than run in a straight line you are told to use a ditch to escape an ambush. You can go either left or right in the ditch, but one way leads to certain death rather unfairly, and restarting forces you to do the stupid automated run sequence again. I hated this demo, by all accounts the actual game itself is no better.
Posted by Daniel Simmonds at 06:36