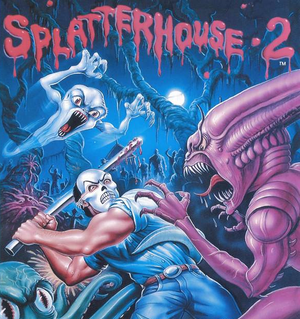 Splatterhouse 2 was released for the Megadrive back in the early 90's. A platforming action horror game spanning 8 levels of madness. I distinctly remember it had a label on the games cover warning the game contained scenes unsuitable for children which I thought was uber cool at the time.

Obviously the game is a sequel to Splatterhouse, a game I never got to play until a few years back. In the first game your girlfriend Jennifer had been captured by Demonic forces, but during the course of the game she is killed (by you in fact as she mutates into a demon and attacks you). But the Hockey mask wearing anti hero Rick learns via nightmares that she is in fact still alive, and still captive, so he heads back to the Mansion of the first game to rescue her for real. The games intro is amazing, and is still amazing today. It had often been said that the Megadrive couldn't do mode 7, but this game achieves it. Not only did the story contain mode 7, it also had speech (of a kind). 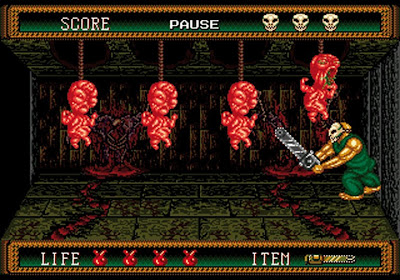 The game takes place over 8 levels. Rick has to punch and kick his way through each one. There are also level specific weapons such as shotguns, vials of acid, and even a chainsaw to be used. The enemies all die really violently, usually splattering apart or dissolving into blood, and each enemy has weapon specific deaths.

Most the game is left to right, but there are a few elevator sections where you are assaulted from both sides of the screen and most survive, and also a few levels have multiple routes (something the first game was huge on). The levels also have lots of natural hazards such as pits, spikes, poisoned water and puking Deer heads, so the game never gets too samey.

The bosses are the real highlight of the game, there be spoilers here!

The first boss is a Jabba the Hutt lookalike who vomits acid at you, when he dies his stomach burst open emitting a pool of stomach acid. Boss two is a giant ectoplasmic head, his eyes explode when he's defeated. The third boss is a particular highlight. The battle takes place in a shed. First you are assaulted by various levitating tools. After defeating these you can then use them to fight the next part of the boss. The next part of the boss is 4 skinless babies hanging by nooses, defeated by chainsawing them up! Amazing, it would never be allowed today! This is followed by a floating ball of flesh, when this is killed it explodes, literally coating the entire screen in blood. Boss 4 is a dead ringer for the mutated Jeff Goldblum in the 1980's remake of The Fly, the 2nd form of the boss is a giant red spider which is a bugger to kill.

Onto the 2nd half of the game. Boss 5 is a mad zombie scientist. It only takes one hit to kill him, but you have to chase him down first. He can be defeated by either punching him in the face (which makes his head explode!) or by setting him on fire. Boss 6 consists purely of a boss fight. It's not too exciting, you just fight various small demons clambering out of a portal to Hell. Boss 7 chases you as you attempt to escape from Hell, you can't defeat him, you just have to avoid his attacks, he looks like a giant transparent dummy. The final level has 2 bosses. First you fight a tentacled sea monster, then you fight a massive demon thing made up of hundreds of tortured heads (this boss is uber hard).

The ending is worth getting to, though I recall once the game crashed as soon as I completed it. The music throughout the game is really somber and moody. The game is good! Believe.

Posted by Daniel Simmonds at 06:55