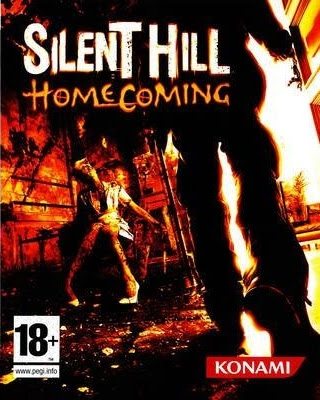 Finally got Silent Hill 5 (Also called Silent Hill: Homecoming). I played this through to completion in 2 sittings. I kinda have mixed thoughts about the game, and am a bit confused to what I think of it.

A young man named Alex Shepherd returns to his home town of Shepherds Glen for the first time since joining the Army many years previously. He discovers the Town which used to be so vibrant has fallen into a state of disrepair. Roads have collapsed, the shops on the high street have all closed down, and there are abandoned rusting cars everywhere. He meets a lady his parents knew called Judge Holloway. She informs him that ever since he left the Town has been getting worse and worse, and there has been a huge spate of missing people, so that currently there are only a handful of people still left in the Town! 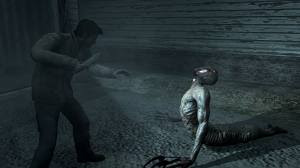 He returns to his childhood home to find his Mum near catatonic, and his Dad off looking for Alex's younger brother who has gone missing. Alex decides to set out and search for his brother as well, as a nightmare he had about Josh is what brought him back to the town in the first place. The town is full of monsters also, but Alex with his military background is able to defend himself. Through the game Alex uncovers a conspiracy by the Town leaders, and that what is happening is maybe due to the nearby town of Silent Hill...

If this review feels a bit muted it's because that's the kind of reaction I got from the game. It does everything right; it sounds good, looks good, plays well yet it feels stale, and like no effort has been put into it. It does feel very much like a Silent Hill game. But excluding the graphical update this could have well been released on the PS2 or X-Box. The graphical update is actually detrimental. The original scared so well because it was really rough looking, that along with the grain filter created a feeling of absolute dread. Everything looks so smooth and clean now, it looks less like a vision of a nightmare, and more like a USA horror series such as Supernatural. 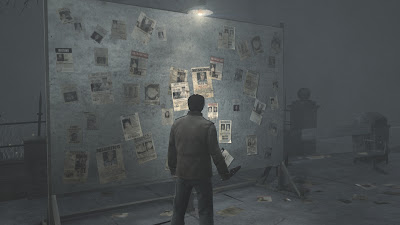 Many of the enemies are rehashed from previous games, there are not many surprises. The bosses all look quite similar to each other, and can be defeated the same way. The locations are not fantastic, and for the most part you don't spend much time in any location before moving on to a new place so a feeling of being trapped never occurs. The story is different, and has twists, but there were no real surprises, and it felt like the twists were just there because they are expected to be in a Silent Hill game.

The combat is good, you have a dodge button now, which makes the combat more intense, there is a weird trend to have Manhunt style brutal finishers which feels slightly out of place. There are nods to previous games in the series which is appreciated, and there are multiple endings (including the obligatory UFO ending). Akira Yamaoka once again creates a fantastic soundtrack. Alex Shepherd is a good enough character, the games increased combat works for him. The puzzles are fun to do mostly, but nowhere near as complicated as the previous games puzzles. 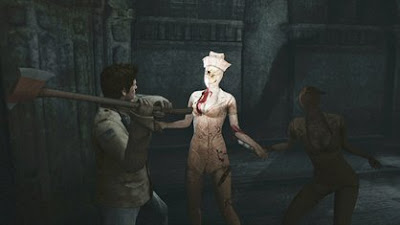 I love the Silent Hill series, and as long as they keep making them I will keep buying them. This is a good game, it just lacks the spark to make it a great game.

Posted by Daniel Simmonds at 06:36